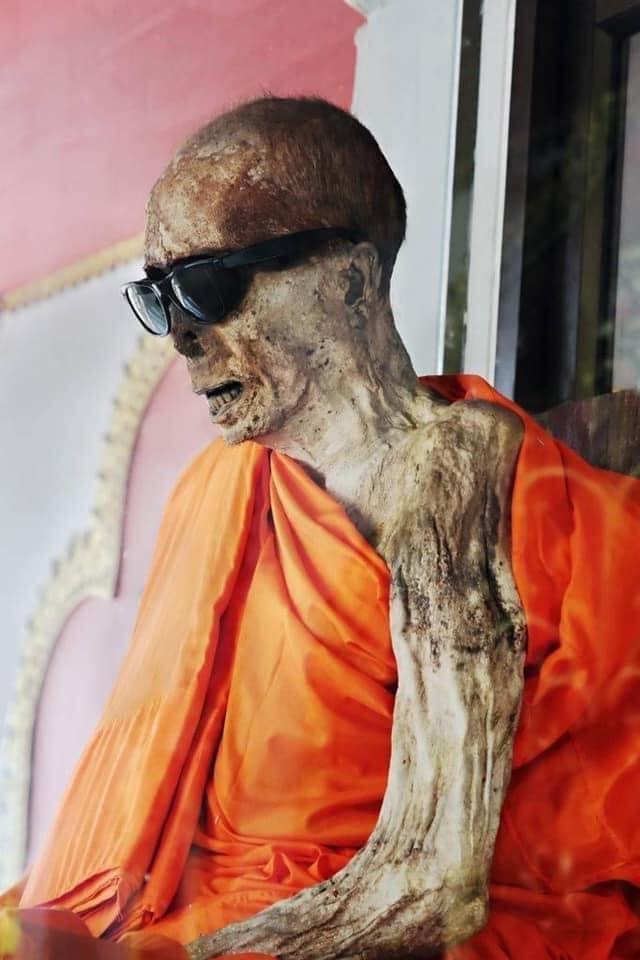 Monks who were members of the Shingon sect of ancient Japan mummified themselves while still alive.

This process is called Sokushinbutsu. The entire process can take anywhere from eight to ten years.

First, the monks would go on a strict diet called mokujikigyo, literally meaning, “eating a tree.” The special diet consists of whatever is predominantly found in the mountains, such as pine needles, seeds, nuts, and resin. During the mokujikigyo, they take part in a regimen involving rigorous physical activity. This controlled system stripped the monks of their body fat.

For another three years, they would continue to only eat bark and roots and begin drinking a poisonous tea made from the sap of the urushi tree, usually used to make lacquer bowls. This causes vomiting; making the body rapidly lose fluids. Also, it would kill maggots that caused the body to decay after death.

The final act of a dedicated monk would be to lock himself in a stone tomb in the lotus position.

The tomb had an air tube and a bell attached to it. The entombed monk would then ring the bell each day to signal that he was still alive. When the bell would cease to ring, it signals that the monk has died in a state of meditation chanting the nenbutsu (mantra about Buddha), and the air tube would be removed and the tomb sealed.

ALSO READ:  How Prophet Daniel Abodunrin Was Killed By Lions At U.I. Zoo In 1991 In Ibadan

The monk’s body would be naturally preserved with skin and teeth intact without decay and with no need for artificial preservation. Many Buddhist Sokushinbutsu mummies have been found in northern Japan that are centuries old and are revered and venerated by many followers.

Sokushinbutsu was outlawed by the Japanese Government in the late 19th century. Governor Samuel Ortom of Benue State has urged Christians in the state to pray for him and his administration rather than castigate him as he gives his best to ensure purposeful leadership in the state.

He said prayer is a duty the people owe their leaders assuring that his responsibility to the people of the state would continue to be his topmost priority.

The Governor spoke Thursday in his message at the Special Church Service heralding the dedication of the new Church auditorium of the RCN Embassy in Makurdi.

He said: “the people owe their leaders the duty to pray for them. Even if I am doing the wrong thing it is your responsibility to pray for me for God to lead me in all that I do.

“As a person, I have been working with God and it accounts for the successes I have been recording in life. I urge Christians to always pray for me rather than castigate me.

“As for me, I will always stand up for the truth. I will always ensure that God takes preeminence in all that I do and I will also abide by the dictates of equity, fairness and justice.”

The Governor who commended the founder of RCN Embassy Apostle Arome Osayi for putting up the edifice and his Ministry in Makurdi the state capital as well as giving his life to the service of God and humanity said millions of lives would be transformed by the messages that come from the altar.

Feast of Christ the King: A Time to Renew Your Faith in Christ – Orji Kalu Feast of Christ the King: A Time to Renew Your Faith in Christ – Orji Kalu

In times when many world leaders seem to be indifferent or opposed to the Christian way of life, it is vital that we remember who truly is king, who truly reigns over our societies and our lives.

This is an excellent moment to reflect on this, as we celebrate the feast of Christ the King. It is a time to remember Christ’s words: “In the world you shall have distress: but have confidence, I have overcome the world” (John 16:33). Happy Christ the king Sunday. – OUK

ALSO READ:  You will someday be the President of Nigeria - Bishop prays for FFK. 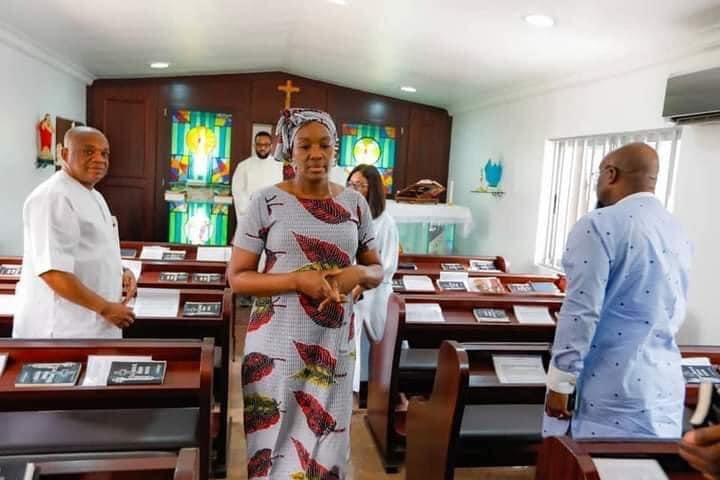 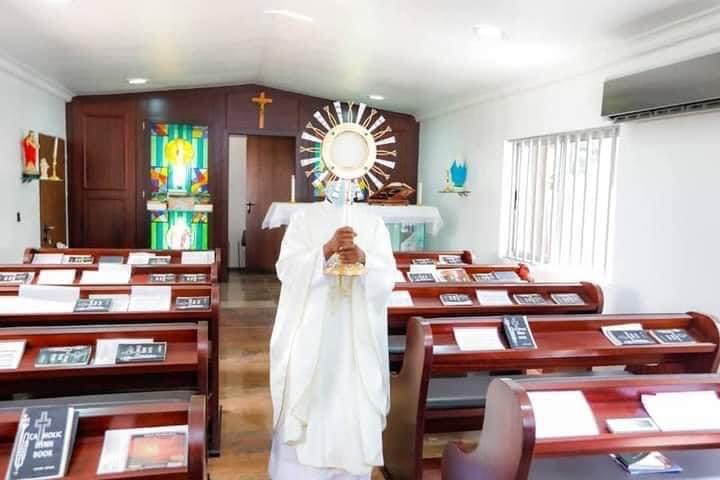 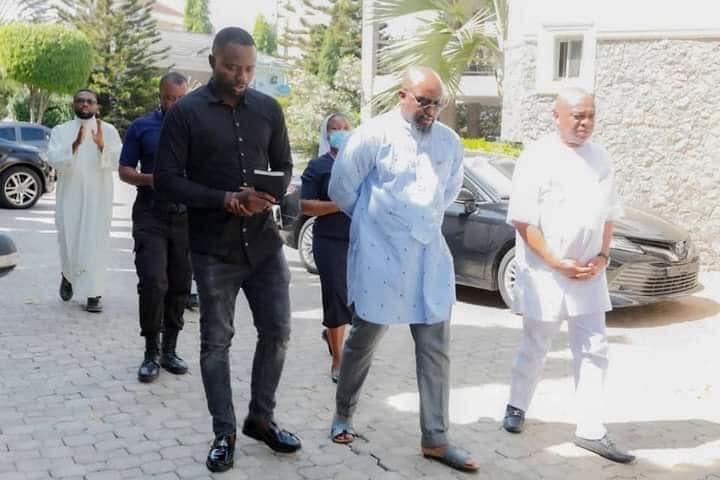 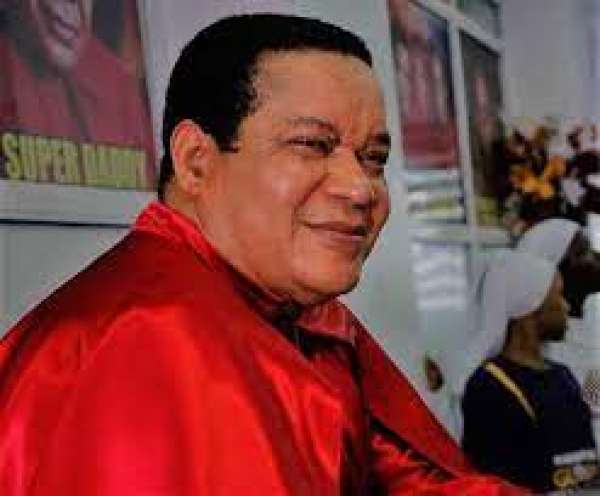 Brotherhood of the Cross and Star (BCS), a Christian religious organisation, has said that some separatists agitating for secession were wasting their time, assuring that “Nigeria will remain one united nation.”

BCS, founded by Olumba Olumba Obu in Calabar in 1956, said this when its
Bishop of Lagos, Jude Uwaezuoke, visited the Lagos Office of NAN on Friday.

NAN reports that the visit was part of the annual weeklong commemoration of the organisation’s Feast of Divine Manifestation.

Uwaezuoke said the prophecies of its leader, Olumba Olumba Obu, had assured that “agitators were wasting their time because Nigeria will not break up”.

“When you are talking about this division, our leader said those agitating are wasting their time.

“He said that he has arrested all those causing confusion, kidnapping and other crimes.

“He said he has arrested all. It is not a revelation, it is an order. He made the pronouncements early this year,” the BCS Bishop said.

Theclergymann said that after a week of the order by their leader, the IPOB leader, Nnamdi Kanu, was arrested.

ALSO READ:  Daddy Freeze reacts to the destruction of church of Satan in Abia says " Even Jesus didn’t destroy a single shrine"

He said Olumba Olumba Obu also predicted an end to the Coronavirus and immediately a vaccine was found for the pandemic.

Also speaking during the visit, another BCS cleric, Paul Ikpi, said Olumba Olumba Obu did not believe in the division of Nigeria, saying God is after the unity of Nigeria.

“Division is not the solution to what we are facing because people can divide today and if there is no love, understanding and there is greed, there cannot be peace.

“If, for example, 10 of us are children of the same father and there is an oil well in my father’s land if there is greed, can that oil bring peace? One man would want to take that oil and kill everybody.

“So, the problem of Nigeria is not in agitation; Igbo can divide, Yoruba can divide, but if there is no love, forgiveness, tolerance, if there are no virtues of God instilled and embedded in them, there will still be division and confusion,” he said.

Speaking on the security situation in the country, Ikpi said a return to the truth would resolve the challenges.

“The insecurity and everything that is facing the country today is because of desperation. which is lack of the Holy Spirit,” he said.

He warned Nigerians against justifying crime. according to him, unemployment in Nigeria is not the reason for crime, insecurity, banditry and kidnapping.

“The only thing government can do is to key into God’s plan because if a good leader falls into God’s plan, God would direct that leader because even some leaders are governed by greed and carnal exposition,” he said.

Ikpi said the Holy Spirit would help leaders to become sensitive to the needs of those they are leading as contained in the teachings of Olumba Olumba Obu in his book entitled ‘The Everlasting Gospel.’

He said that the BCS leader encouraged members of the organisation to participate in politics to sanitise the system.

“Our advice for the nation and the leaders is that Nigerian leaders need to submit themselves and key into God’s divine plan, do away with greed and personal interest,” he said.

He said God’s plan would help the nation’s leadership to become servant leaders.

Speaking on rape and defilement of minors, Chinwe Wali, a female BCS cleric said that the vices were rising in Nigeria because humans had deviated from God’s love and nature.

Wali said God was concerned about rape and defilement of minors and called on Nigerians to embrace His love to kick the menace out of the society.

“It is a very serious matter as far as the father is concerned and I will say that the cause of minor defilement is that man has deviated from the laws of nature, from the teachings of our Lord Jesus Christ.

“If that man that is defiling the child has the love of God, he will not do that, knowing that Christ dwells in every one of us here because He created us and it is His Spirit that is keeping us going,” Wali said.

She added that “love closes racial, gender and cultural barriers to ensure harmony and peaceful coexistence.”