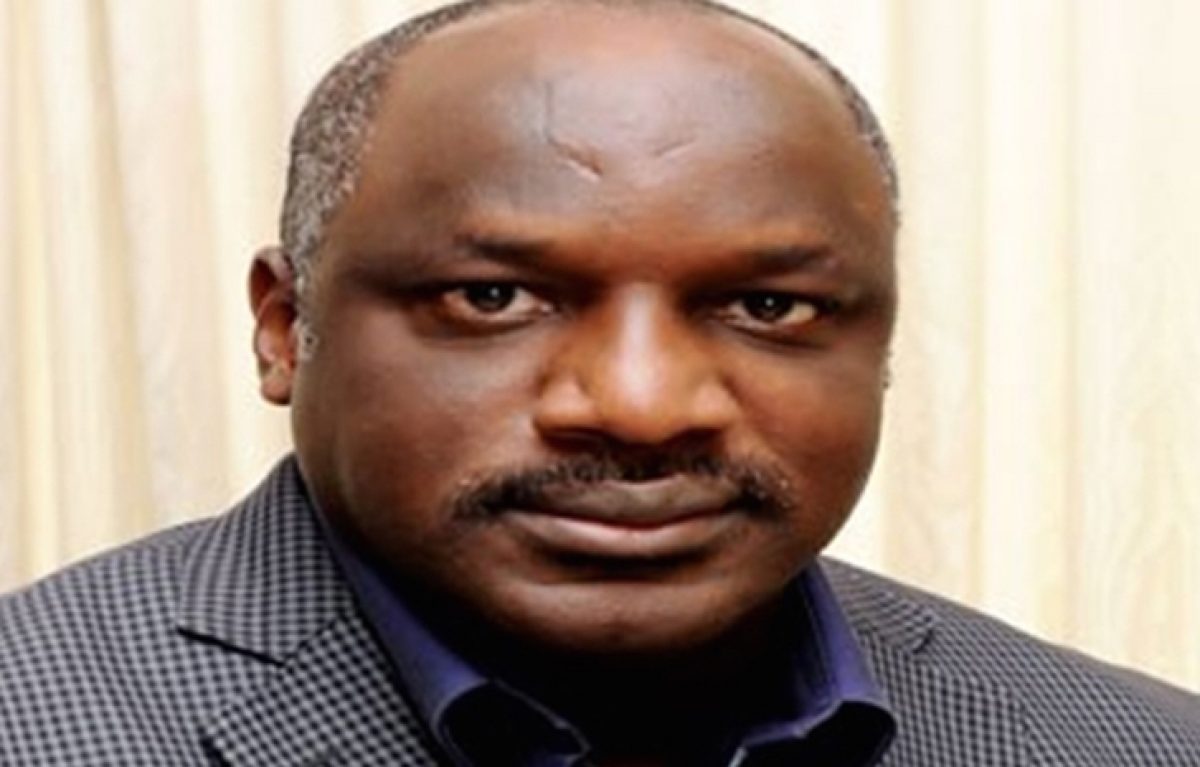 It was gathered that the Ode Ekiti born politician was said to have died this evening after he collapsed in his office in Abuja.

Report says he was rushed to an hospital where he eventually gave up the ghost.

An aide to the former lawmaker confirmed to TVC news that Senator Aluko did not exhibit any symptoms of sickness prior to his death.

He was one of the Governorship Aspirants in the 2018 election on the platform of the All Progressives Congress, APC in Ekiti State.

Gbenga Aluko was born on 20 July 1963, to Professor Sam Aluko, a prominent Nigerian Economist from Ode Ekiti, in Ekiti State.

He attended Federal Government College, Ilorin, and then was admitted to the University of Benin, graduating in 1982 with a degree in Geography and Regional Planning.

He went on to the College of Energy and Petroleum Studies, Oxford, England for a Post Graduate Course in International Oil Trading and Pricing. Positions held between 1983 and 1999 included Managing Director/CEO of HYGYNIX, Executive Director of Baseline Petroleum and Chemicals and Executive Chairman of Independent Strategists.

He was appointed Special Assistant to the Minister of Transport and Aviation and General Manager of Nigeria Shipper’s Council from 1993 to 1995.

Aluko was opposed to plans to privatize the Nigerian Mint. He was appointed Chairman of an ad hoc committee to investigate the controversial closure of Savannah Bank by the Central Bank of Nigeria.

In September 2002, he seconded a motion to set up an ad hoc committee to investigate alleged constitutional and budgetary breaches committed by President Olusegun Obasanjo, which could be grounds for impeachment.

In October 2002, Aluko replaced Oserheimen Osunbor as Chairman of the Senate Committee on the Independent National Electoral Commission.

Aluko was involved in controversy when he was among those indicted by a panel chaired by Senator Idris Kuta that investigated financial improprieties by Senators.

The panel and a subsequent ad hoc committee chaired by Senator Victor Oyofo issued reports that found Aluko had overcharged for repairs to senators’ quarters and overpriced computers and office equipment supplied to senate members and recommended that he refund the excess. However, in September 2002, the Senate adopted a motion proposed by Aluklo that the senate should duly absolve all Senators indicted in both reports.

After leaving the Senate, Aluko continued in private enterprise, holding a controlling interest in Alstegg and Midlands, a Civil Engineering Firm and serving as a Director of Crest Healthcare, Consultant to DFID on Parliamentary Matters and Director of Government Affairs with Chevron Nigeria.

He left the PDP for the Labour Party, on which platform he unsuccessfully contested the Ekiti State governorship election in 2007.

In December 2009, Aluko returned to the PDP and later decamped to the All Progressives Congress (APC).

Aluko is married to Sileola and the couple has five children, including the footballers Eniola and Sone.

Video: Girl Snubbed By Boyfriend After Spending Money On A Surprise Apology 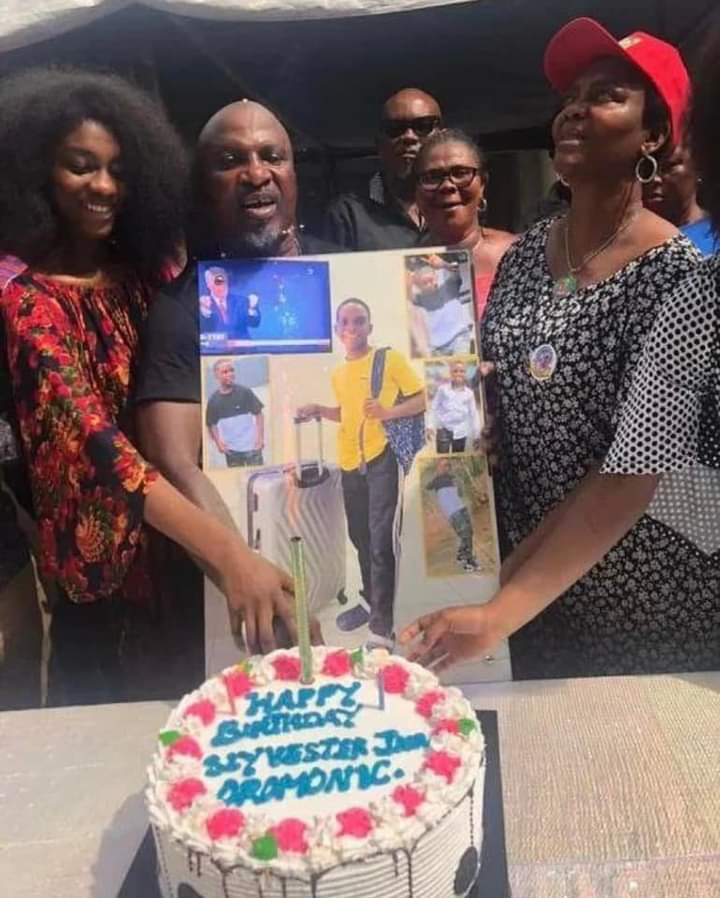 Late Dowen College student, Sylvester’s family and friends gathered to celebrate his 12th posthumous birthday, today 4th December 2021, days after he died from injuries he sustained after allegedly being assaulted by schoolmates.

Late Sylvester would have been 12 years old today.

See photos and video from the event below. 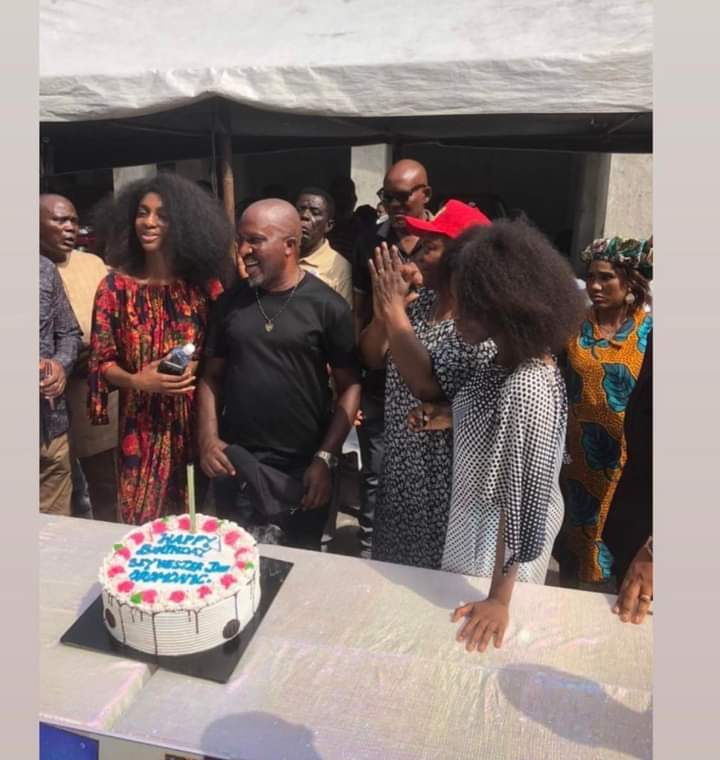 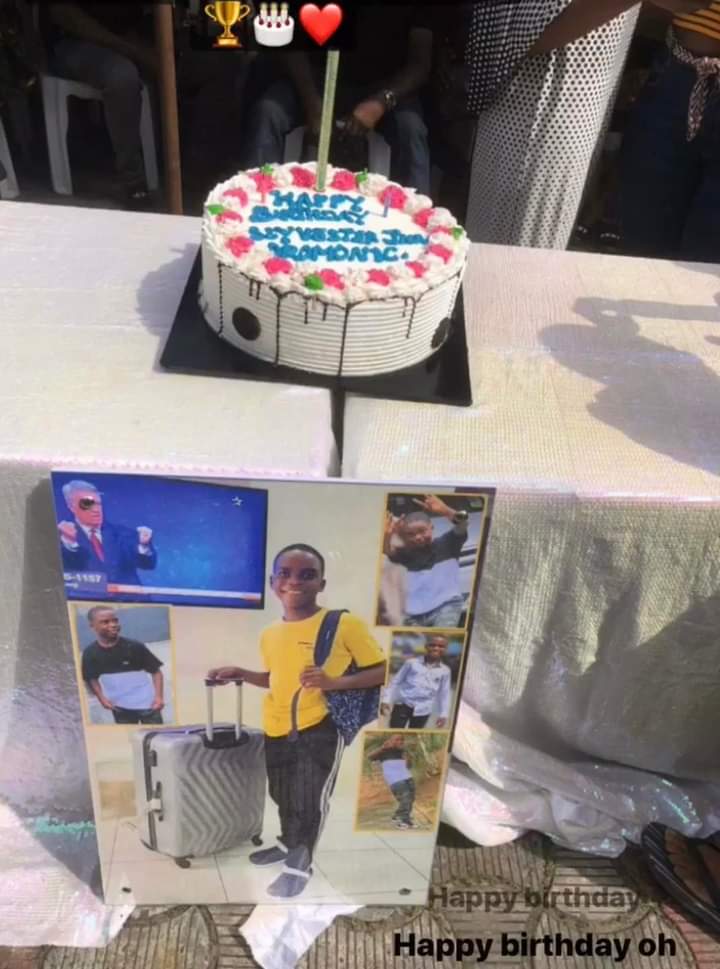 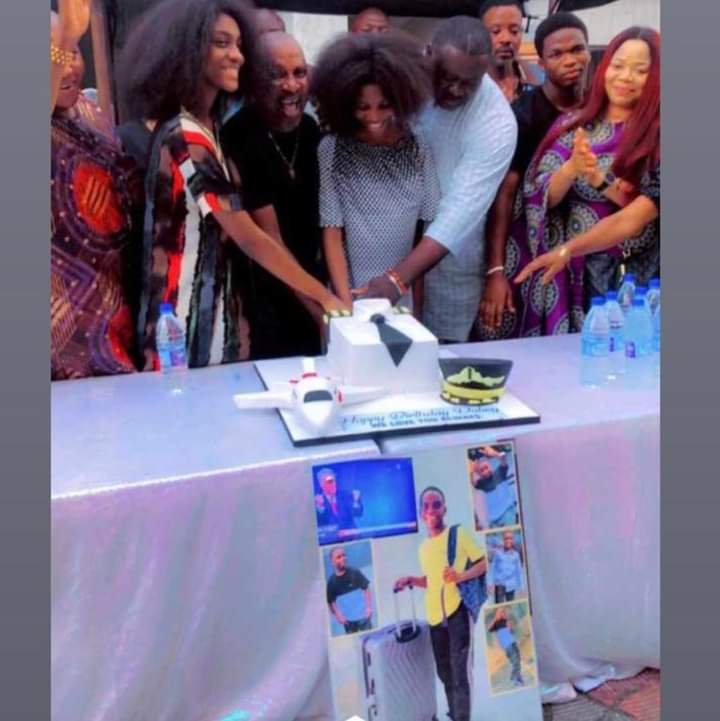 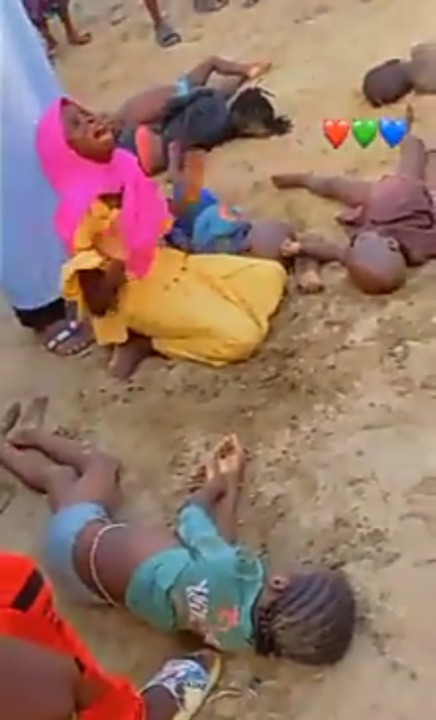 Eight children have been found dead in a Lexus SUV parked in front of the owner’s house at Adelayo Street, Agunaje, along Badagry Expressway in Lagos.

The incident happened on Saturday.

Adekunle Ajisebutu, the police spokesperson in Lagos, confirmed the incident.

“The eight children were said to have mistakenly locked themselves in an abandoned car while playing.

“Their bodies have been recovered and deposited at the Badagry General Hospital’s morgue for autopsy so as to determine the actual cause of death,” Mr Ajisebutu said.

According to reports, the vehicle is owned by one Saliat Kazeem, who parked the vehicle in front of her house.

The vehicle reportedly has a childlock feature and could only be opened from outside.

The children, who were between the ages of four and six, were found dead by a parent who was looking for her ward.

Mr Ajisebutu, a chief superintendent of police, said the police commissioner, Hakeem Odumosu, has ordered a thorough and speedy investigation into the circumstances surrounding their death.

Mr Odumosu, who commiserated with the families of the victims, assured them of proper investigation. 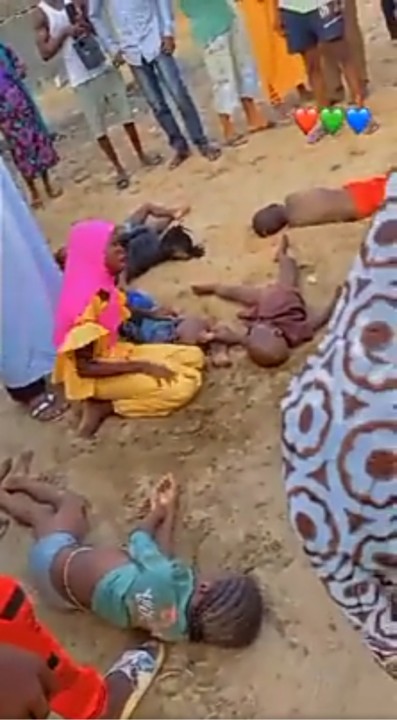 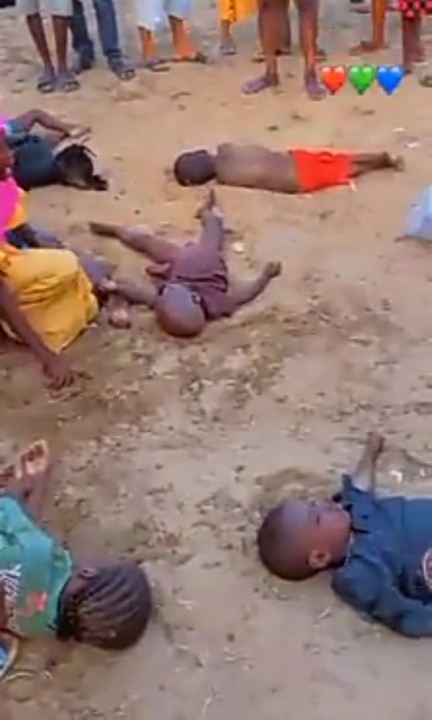 Remains of Ms Itunnu Babalola, a Nigerian lady who died in Cote D’Ivoire prison recently, were on Saturday laid to rest amidst tears by friends and relations at the Sango Cementry, Ibadan.

The News Agency of Nigeria (NAN) reports that the late Babalola, popularly known as, Becky Paul, was reported to have been sentenced for offence she did not commit.

Speaking during the funeral,

Alhaji Abdur-Rahman Balogun, Spokesman for Nigeria Diaspora Commission (NIDCOM), said that the Federal Government would ensure justice for the deceased whether alive or in death.

Balogun, who led the Federal Government delegation, said: “It is a sad moment for the family of Itunnu and the Federal Republic of Nigeria.

“This is part of the Federal Government and citizens’ diplomacy.

“Federal Government has been involved in this matter since the story broke out. The lady was wrongfully accused of something she didn’t do.

He said that the lawyer appealed against the case in court and her sentences was reduced from 20 years to 10 years.

According to him, we were not satisfied because we knew she didn’t do what she was alleged of.

He said: “We were pressing for justice until she was suddenly taken away from City to Interland so that they can perfect her justice.

“Unfortunately, we heard she developed complications in prison and within few days, she passed on when we were close to getting justice for her.”

Balogun said that the Federal Government would still press further to get justice for Itunnu, whether alive or in death.

He said that government had pressed for changes and demanded for autopsy which they had carried out.

“Based on this, the lawyer who appealed the case is pressing on to ensure justice for Itunnu.

“Since she is the breadwinner of the family, government will not leave the family alone. We will assist the family to the best of our ability,” he said.

Also, Mr Olaolu Babalola, the elder brother of the deceased, told newsmen after the interment that the family would pursue justice for his late sister.

Babalola said that the family was aware that Itunnu knew nothing about the allegations levelled against her.

Earlier, in his sermon, the Most Superior Evang. Daniel Otakoya of Celestial Church of Christ, Agbowo Parish, Ibadan, said the death of Itunnu could be a breakthrough for Nigeria as a nation.

Otakoya urged Nigerians to keep praying for the country rather than cursing nation.

He urged well-to-do Nigerians to learn from the death of Itunnu, who was brought back to the country after her death in Diaspora.

Itunnu’s corpse was brought in via Air Cote D’voire around 11.00 p.m on Friday and was received by the officials of the Ministry of Foreign Affairs and Nigerians in Diaspora Commission at the Muritala Muhammad international Airport, Lagos.

It was later accompanied to Ibadan by staff of NIDCOM for the service of songs and interment.

After the interment, Balogun led the team on a condolence visit to Itunnu’s father, Mr Ebenezer Babalola, at his University of Ibadan (UI)’s residence.

Letters and messages of condolences were presented, on behalf of the Federal Government, Nigerian Embassy in Cote d’Ivoire and Hon. Abike Dabiri-Erewa, Chairman/CEO, NIDCOM, to Babalola.