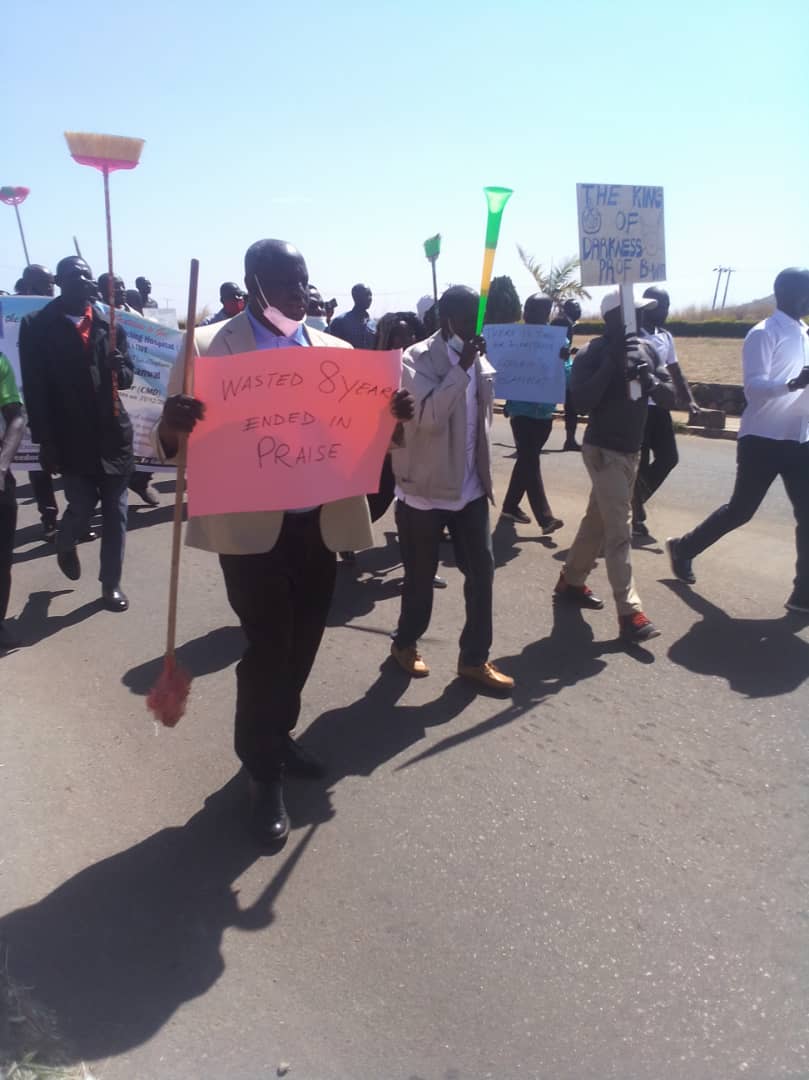 It was funfare and Celebration at the Permanent Site of Jos University Teaching Hospital (JUTH) as the Former Chief Medical Director of Jos University Hospital, Professor Edward Bwanwat, bowed out from office.Bwanwat who served for two terms of eight Years.

The JOHESSU staff of the Hospital took to the major roads as well as nooks and crannies of the hospital to celebrate the exit of the former CMD.

Speaking to the press, secretary of JOHESSU,JUTH branch, Comrade David Atu said they are very elated because the end of evil reign of 8 years has ended and they can now breath fresh air.

During his reign, Mr David continued, “staff welfare was not prioritise, before now, there was Christmas bonus that was always given to the staff at the end of the year and there was also renting block that staff were entitled to but were all jitisoned”

“Up till now we have not been paid our salaries, there is no consumables in the hospital, CT scanned and MRI machines are both malfunctioning currently in the hospital and patients are always referred to Bauchi for scanning” he lamented 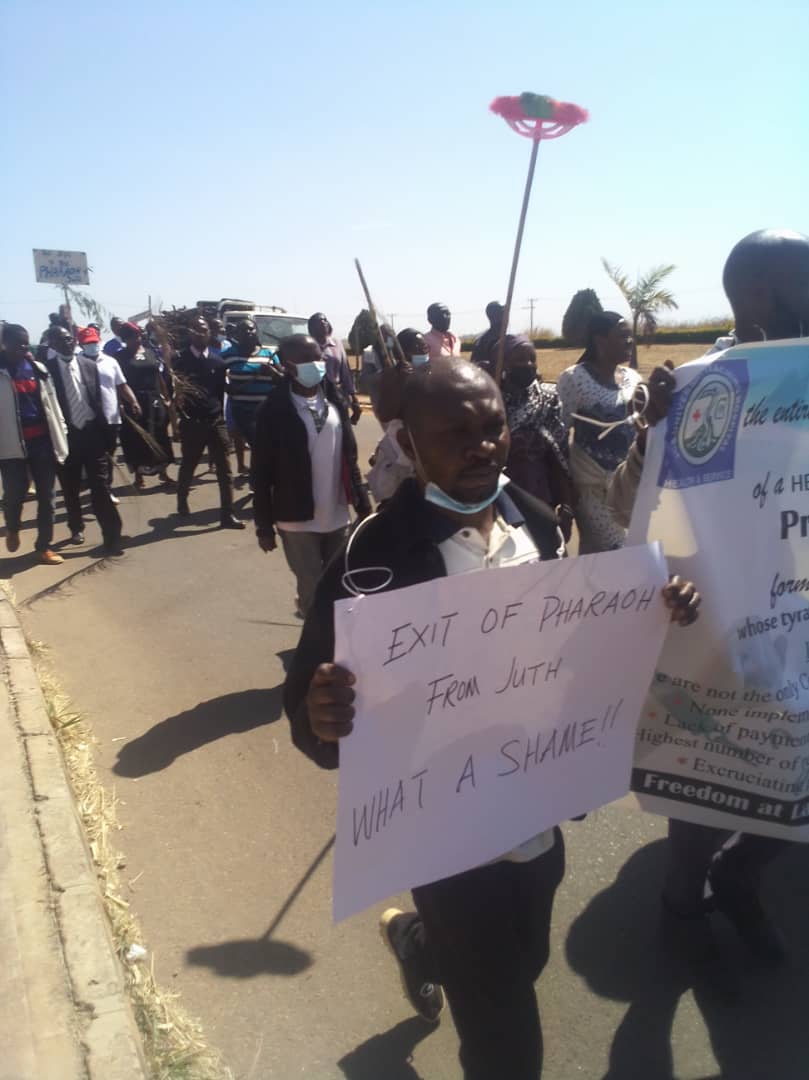 Mr Adams continued, “four years that our members were teargased now the CMD is no more in office, anybody that will emmerged as CMD should first seek the wisdom from God not to towed the path of Bwanwat, because the Bibles says when the Wicked rules, people surfer but when rightous rule,the people rejoices”

The over joyed and elated staff were carrying Placards with inscriptions such as. ‘Who is the Elephant now?, ‘there is time for everything’, ‘the devil is gone’, ‘freedom at last in JUTH’, ‘we can now breath fresh air’, ‘the time to favor JUTH has come’, ‘the exit of Heartless CMD’.

They all burnt brooms and other items to signify the end of Czar has come. Toyin Saraki has been appointed by WHO Foundation World Health Organization (WHO) as Inaugural Global Health Ambassador.

I am delighted to announce that the World Health Organization Foundation has named me their Inaugural Global Health Ambassador. This is a natural progression of the blossoming collaboration between my advocacy, philanthropy and our intrinsic synergies in relation to fighting the many challenges faced in global health.

Global health needs us all, from every country, to work as one. We must all dedicate ourselves to keeping the world safe, and advocate for the protection of the most vulnerable. By working together, we can change the lives of future generations.

I look forward to propelling one of the world’s most influential global health initiatives forward through the joint force and work we have initiated. We have set out to protect the health and well-being of everyone, in every part of the world, and I am honoured as the Inaugural Ambassador to reiterate my commitment to the development, growth and mission of the WHO Foundation, and to support the World Health Organization (WHO) and the global health community.

We are thrilled to announce Her Excellency Toyin Saraki as WHO Foundation Ambassador for Global Health.

She is a highly esteemed global advocate with decades of work dedicated to women’s and children’s health and empowerment, ending gender-based violence, and improving lives in sub-Saharan Africa with The Wellbeing Foundation.

We are applauding Mrs Saraki’s tireless commitment to improving global health and are delighted to welcome her as an Ambassador for Global Health. ALSO READ:  We Did Not Approve Any Drug Or Vaccine For Covid-19 - NAFDAD
Continue Reading Against the background of some news stories making rounds in some National Dailies insinuating resurfacing of Wild Polio Virus (WPV) in Bauchi State, the State Government has debunked such claims, describing it as “Misrepresentation of Information”.

Addressing Journalists in his office Monday evening, the Executive Chairman of Bauchi State Primary Health Care Development Agency (BSPHCDA) Dr. Rilwanu Mohammed said that there has not been any case of Wild Polio Various in any part of the state since 2013.

He said that what BSPHCDA detected was 38 cases of Circulating Vaccine-Derived Polio Viruses out of the 315 samples collected from January to December 2021.

Dr. Rilwanu further said that as part of the post-polio free certification activities, the World Health Organization (WHO) has directed every country to intensify surveillance activities, strengthen routine immunization for children and continuous public health education.

He disclosed that, “the circulating vaccine-derived polio viruses which are referred to as the circulating Mutant Polio Viruses (cMPV) normally results from mutation (change of form/characteristics) of the attenuated polio viruses used in the manufacturing of the Polio Virus. These are not Wild Polio Virus (WPV) that causes paralysis, but are used as indicators to measure the quality of immunization services and disease surveillance”.

“Bauchi State like other states of the Federation remains free from Wild Polio Virus. The last case of WPV detected in the state was in 2013. All measures to prevent the recurrence of the virus as recommended by WHO are religiously followed in the state”, said Dr. Mohammed.

He said that, that was the why he kept stressing during his speech at the flag off of OBR 1 campaign last Saturday that “It is not WPV but cMPV that is detected in the state”. The Task Force has also banned shisha smoking in the state.

The committee also reviewed the laws regulating hotels, restaurants and event centres in the state.

The Chairman of the Committee, Baffa Babba Dan-agundi, said this after a meeting with the owners of hotels, restaurants and event centres to inform them of the new development.

The committee informed them of a new levy by the state government that will help in sanitizing their places of business for the purpose of avoiding acts of prostitution in the state.

ALSO READ:  We Did Not Approve Any Drug Or Vaccine For Covid-19 - NAFDAD

The committee was constituted under the state tourism law.

“Part of our terms of reference is to stop underage children from entering hotels without their parents, banning of shisha smoking, swimming between men and women in the pool, lesbianism and gay practises.

“The committee will further oversee the activities of DJs at wedding ceremonies and event centres. All events centres should be closed by 11pm,” he said.

Shortly after a meeting at the Government House, Governor Abdullahi Ganduje commissioned more than 8 cars for the conduct of the committee’s assignment.

The Committee Chairman assured the governor of their total commitment in the discharge of their responsibilities.