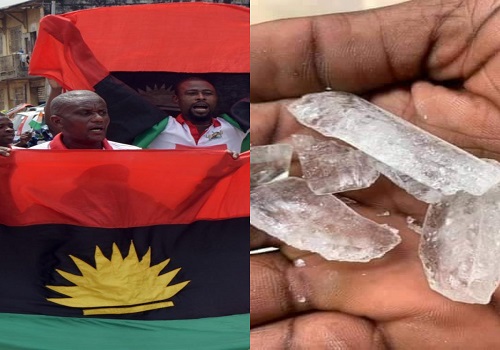 The Indigenous Peoples of Biafra (IPOB) has vowed to go after distributors of methamphetamine, otherwise known as ‘mkpurummiri’ in the South-east.

It said it cannot allow peddlers of the illicit drug to destroy the future of the youths of the region.

The increase in consumption of the drug is said to be partly responsible for the recent violence and criminality in the region among the youths.

Some communities in the South-east recently declared war on distributors and consumers of the banned substance.

A clip circulating on WhatsApp and Facebook showed some consumers and distributors of the drug being tied and flogged as punishment. They were eventually compelled to make a vow not to engage in the sales and consumption of the drug.

IPOB spokesperson, Emma Powerful, in a statement, described the situation as “ugly and disturbing.”

He hailed the communities for taking action against the sales and consumption of hard drugs.

Mr Powerful said the consumption of hard drugs by some Igbo youths was “very strange and completely unacceptable.”

“We won’t allow that to happen here in the region, we encourage every community to have departments to checkmate those selling and taking Mkpuru Mmiri.

“IPOB hereby declares war against this nonsense. We shall go after those taking or distributing this harmful, illicit drug. Henceforth, anyone found peddling, consuming or in any way involved in the distribution of this illicit drug shall be decisively dealt with.

“Biafran youths are known for their enterprising spirit, entrepreneurship and diligence. IPOB will not allow evil men and unpatriotic elements to ruin or destroy the future of our youths with Mkpuru Mmiri.

“While we commend communities who have already risen to curb this evil, we solicit useful information about those behind the distribution of this illicit drug so we will teach them in the language they understand,” the IPOB spokesperson said. The Department of State Services has refused to obey court orders granting Nnamdi Kanu maximum comfort in detention, change of clothing, amongst others, Ifeanyi Ejiofor, lead counsel for the embattled Indigenous People of Biafra leader has said.

The lawyer, in a statement on Tuesday, kicked that the detaining agency has “unrepentantly continued to treat the orders of the court with greatest disdain”.

The PUNCH had earlier reported that Justice Binta Nyako of a Federal High Court in Abuja ordered on December 2, 2021 that the secessionist leader should not be discriminated against in the custody of the secret police.

The presiding judge had also ordered that Kanu be given maximum comfort possible in detention, be allowed a change of clothing, be allowed free practice of his Jewish faith including access to his Jewish religious materials, allowed to receive any visitor of his choice, and allowed to mingle freely with other inmates in DSS custody.

Justice Nyako also adjourned the trial of Kanu till January 18, 2022, after granting a motion for an abridgement of time.

But Ejiofor said he visited Kanu in DSS custody on Monday, saying that despite the orders made by the court on December 2, 2021, the DSS flouted and ignored the court orders.

The statement was titled, ‘Update On Today’s Visit To Our Indefatigable Client – Onyendu Mazi Nnamdi Kanu At The Headquarters Of The Department Of State Services (DSS) Abuja’.

He wrote, “We were informed by our client – Onyendu Mazi Nnamdi Kanu that none of the pronouncement made by the Court on the 2nd of December 2021 has been obeyed by the lawless DSS. They have unrepentantly continued to treat the Orders of the Court with greatest disdain.

“Our client – Onyendu Mazi Nnamdi Kanu further informed us that he had not eaten anything since Sunday, apparently being punished because we dared to complain to the court about the harsh condition under which he is being held in custody. But, very, unfortunately, this should be the height of their reckless affront to the orders of court.

“At the time Her Lordship made these far-reaching orders in open court, I did not mince words in bringing to the attention of the court that the operatives of the DSS will flout these orders, pursuant to which the court specifically directed me to come back to her with these facts if her order is flouted by the detaining authority.”

He said the legal team of the IPOB leader would be approaching the court immediately with the development, which he described as “totally unacceptable, grossly condemnable, and intolerable.”

Ejiofor insisted that Kanu has not been convicted for committing any crime and he is still presumed innocent of every allegation against him.

“The detaining authority (DSS) is an Agency clearly established by instrumentality of the laws and should operate within the confines of the same laws establishing them, and should not be seen as a lawless entity, which unfortunately is what they represent in practice,” he said.

Kanu, 54, was born on September 25, 1967, at Afaraukwu, Abia State. He had been arrested in 2017 for demanding the secession of the South-East zone from the Nigerian State.

However, he jumped bail in June 2018 before leaving for the United Kingdom, though he said that he fled because his life was no longer safe in Nigeria.

After about three years abroad, the Attorney General of the Federation, Abubakar Malami (SAN), at a press briefing in Abuja on June 29, 2021, announced that the IPOB leader was re-arrested in a foreign country and extradited to Nigeria.

His lawyers had said the IPOB leader was re-arrested in Kenya and whisked to Nigeria.

Upon his re-arrest and extradition in June 2021, he was re-arraigned before Justice Nyako for terrorism-related charges brought against him by the AGF office. Kanu has since been remanded in the DSS custody in Abuja and has since appeared in the same cloth he wore at the time of his arrest.

Meanwhile, the AGF has said that it is premature to pardon Kanu, adding that the IPOB leader is still standing trial for terrorism-related charges.

On November 19, 2021, some respected Igbo elders, led by Minister of Aviation in the First Republic, Chief Mbazulike Amaechi, visited the President, Major General Muhammadu Buhari (retd.) in Aso Rock and requested the unconditional release of the detained secessionist leader.

Buhari had told them he would not want to interfere in the running of the judiciary but said he would consider their demand though “a heavy one.”

Malami had also on November 10, 2021, said a political solution cannot be ruled out to resolve the crisis surrounding separatist agitations in Nigeria but he recently made a U-turn and said the option is not on the table yet. 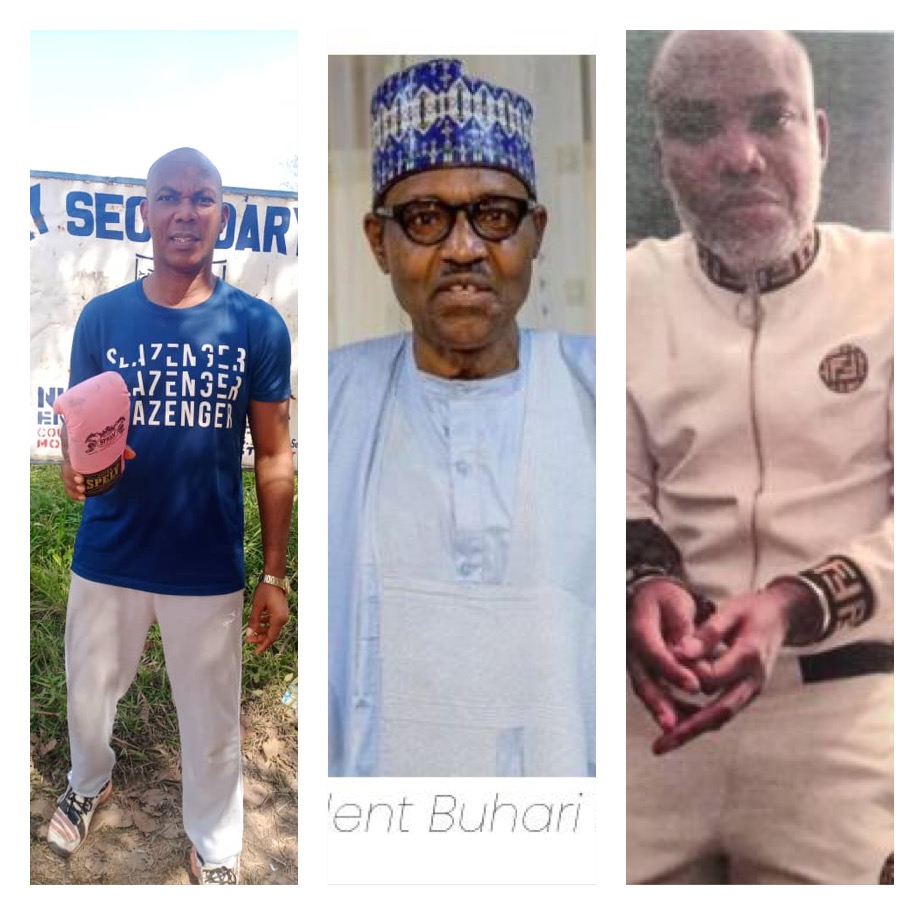 In a short interview with Chrysora Media in his resident in Enugu on Monday, Mazi Okoronkwo
said that the unfolding of event especially the peaceful Monday’s sit-at-home experienced in South East States is a demostration of pubic opinion.

Democracy is the Government of the people, he said and Judicial Justice in Democracy system of Government is for (1) The Complainant,(2) The Accuse and (3) Public.

“Therefore when the General public is of one opinion, the Government is duty bound to allow that opinion for the interest of peace and unity. If the Complainants in the case of Nnamdi Kanu decide to withdraw their cases for the interest of out of court settlement, it is the right thing to do and at the right time and direction.

Mazi Ikechukwu Okoronkwo, the sports Ambassador explained that the above action has nothing to do with interference with the judiciary but it is a process allowed in a system to decongest Government owned Costudy center for the interest of fairness and spirit of Correctional in line with “No winner No Convict” approach.

“Actually We at the South East is beginning to see some progress in some Federal roads project by President Mmahumed Buhari expecially Enugu/ Okigwe/Umuahia road which i have witnessed during grassroot boxing talent hunt exercise, which it is a very big plus to the FGN
But the continue prosecution of Mazi Nnamdi Kanu will damage the good image of this administration, because some of the compaign of Mazi Nnamdi Kanu is calculated by the public and seen as a fight against Corruption and slavery mindset of some particulary people in the helms of Government affairs” Mazi Okoronkwo said.

Finally speaking, The ex international boxer calls on the Federal Government to take the bull by the horn by withdrawing all the criminals cases against Nnamdi Kanu and discuss with him directly without any third party on how the country will move forward so that the Unity of our Nation will be use to reshape other west Africa and Africa Nation as Nigeria is calculated to be the leader of African Nations.

“God has made it that South Eastern States seen as one of the major Arrows of Nigeria and should not be compared with other political zones. Release of Mazi Nnamdi Kanu will promote home security and Africa Peace” Mazi Okoronkwo said. 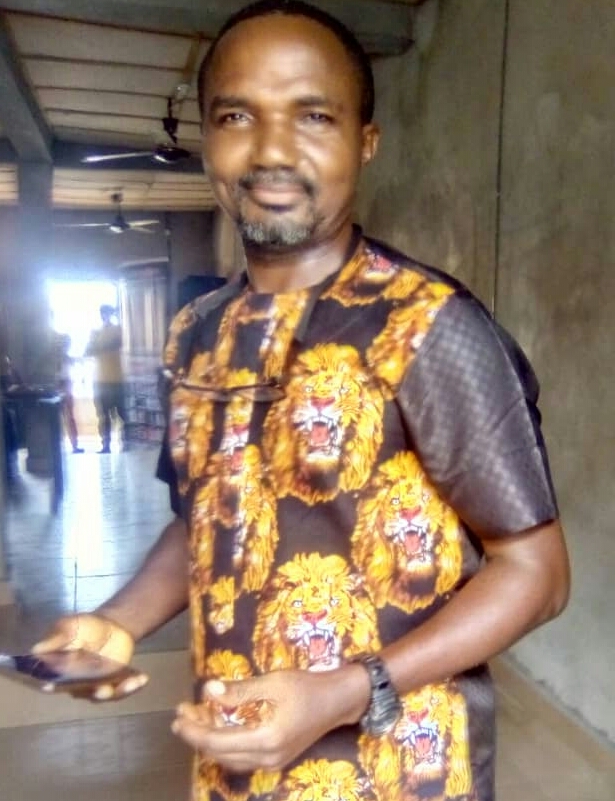 Igbos has been urged to embrace their rich cultural traditional heritage and strive hard to protect them in that it will change the mindset of Ndigbo for a better society.

Speaking while delivering his lecture on Odinani series on Ozioma Odinani,at Awada Obosi in Idemili North local government area , the founder Ozioma Odinani , Dike Nweukpaja, emphasized that there is no need for igbos to start with pleasantries because the need hasn’t arise, igbos has to shun behaving like uncircumcised people since the Unity and Oneness which is Paramount is far .

He urged Igbo to reformed themselves and go back to some important features that their fore fathers have that makes them live a little pure life with brotherly love and stop acting like over fed baby .

According to Dikenweukpaja ,god gave Igbos wisedom which they used to make wealth,”let igbos use their wisedom and make a society devoid of rancor and spread their tentacles and shun societal vices ..

“Ndigbo let us not forgotten the wise saying that provides “Onye buru Chi ya Uzo, ogbagbue onwe ya na oso”, also another Version provides “Nwata buru Nmanwu Uzo, ya na Oso, nmanwu buru ya Uzo, Nkwukwu ezue ya aru” (When one is ahead of his God, he will run of of breath…. When a Child trot ahead of a Menacing Masquerade he will be running out of control, but if the masquerade is ahead, the child goes into a Fit with sweat as his movement is measured with the Stride of the masquerade.

“Let igbos remember their ancestral messages that outlawed anything that is abomination and know their gods, added that Ndigbo should joined together and shun the senseles beliefs that are brewing the Igbo land and form a common front for Unity of purpose. He stated .”

Dikenweukpaja remarked that imported outside God has done Ndigbo more harm than good.

He called on the Elders in Igbo land to rise up and live the life of Elder, and bring the new generation closer to Igbo culture and the tradition of land which almost about to go on extinct andurged all Ndigbo to instil on their children the important of Igbo culture and tradition.

The Elders should be honest ,live examplary life and seat with Ofor na Ogu not Bible, and enlighten the young igbo generation the important of ofor na ogo as well as the oath of ometelu buru ,citing that the white people decived igbos and steal away their culture.