The 32-year-old actor is being tried for murder which he had pleaded not guilty to.

The incident happened on Saturday 17th, May 2020, at their home located at No. 4, Sebil Kazeem, Cele-Igbe, Ikotun, Lagos.

Ojo told the court he was an officer in charge of surveillance in Ikotun Division when the case was reported about 7.00 p.m. in May 15, 2020

He was led in evidence by the state counsel, Mrs Adebanke Ogunnde.

The police officer told the court that the brother of the deceased, Joshua Osho reported the case at the station.

“When I got to the hospital the deceased was rushed to, I met him on a stretcher with a deep cut on his left chest, lying lifeless. I also met the defendant who had also sustained minor injuries, sitting down in front of the hospital with a knife in his hands,” the officer said.

“He said he wanted to stab more people but my team and I stylishly collected the knife from him and took him to the station.

“There were many people, mostly Hausa boys in front of the hospital and I asked what happened and they told me the defendant was apprehended when he wanted to escape.

“I took the defendant to a hospital beside the station to treat the injuries he sustained. His statement was taken voluntarily while the statement of the brother of the deceased was also taken.

“Investigation revealed that the deceased, with some other tenants and the defendant, had issues on NEPA bill in which the defendant refused to pay N1,000.

“The defendant angrily went inside the house, brought out a table knife and stabbed the deceased on the chest, following the disagreement,” he said.

While being cross-examined by the defence counsel, Mr Wale Ademoyejo, the witness said he had been in service for 20 years and that he wrote a statement for the defendant because he was not in good mood.

The police officer said he based his statement on what he was told and that the defendant also confirmed that he stabbed the deceased.

He also confirmed to the court that he was aware that the deceased, defendant and other tenants came to the station in the morning of the alleged incident over the Nepa issue and the officer on duty warned them to maintain peace.

The witness, however, said that he was not aware that the defendant came back again to the station to complain that his neighbours did not allow him into the house.

ALSO READ:  Pregnant Wife Reportedly Stabs Her Husband To Death For Planning To Marry Another Wife

According to him, the defendant was given a chance to call his lawyer but he called his aunt to the station instead.

He also confirmed to the court that he did not record the statement of the defendant on his phone because he was using a small phone at the moment.

“The complainant said that when the defendant picked up the knife, all the occupants ran out of the room but the deceased drew closer to him.

“The complainant, while making his statement, said that the defendant stabbed the deceased in the compound but when we got to the house, none of the tenants was ready to write a statement and I did not make any arrests.

“I called a photographer to take a picture of the deceased at their hospital and I cannot tell if this is a case of manslaughter because the defendant confirmed that he stabbed the deceased,” the witness said. 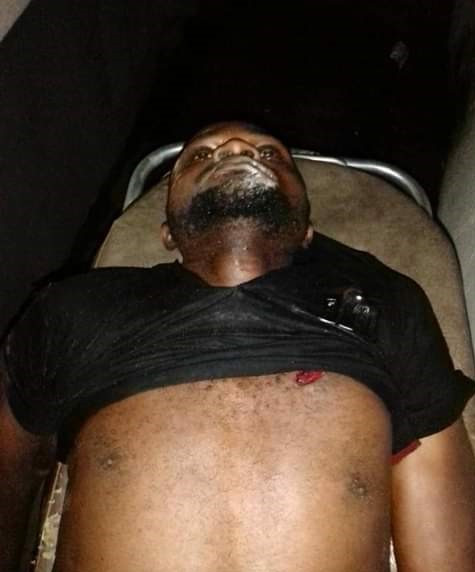