Persons alleged to be operatives of the Eastern Security Network (ESN), the militant arm of the separatist group, Indigenous People of Biafra (IPOB), have written to Ukwulu Community in Dunukofia LGA of Anambra State, warning them of plans to attack the community.

A notice pasted on a part of the community, by persons alleged to be ESN operatives, read: “Respect yourself Ukwulu about sit-at-home, to avoid crying had I known. We are watching you since, and you people are disobeying us because of dead Nigeria.

“From Monday upwards, disobey us again and have yourself (sic) blamed. ESN is coming for you.”

Our source said the notice has sent jitters up the spine of residents of the area, but the state police command has also responded by deploying huge security to the community.

DSP Toochukwu Ikenganyia, the Anambra State Police Command’s image maker said: “The Commissioner of Police, CP Encheng Eworo, has deployed police reinforcement team to Ukwulu Community, and urges the residents to help the police with credible information aimed at identifying the bad elements among them.

“The CP calls for calm while thanking the members of the public and the community for prompt circulation and calling the attention of the Police and other security agencies.”

Ikenga said the command has beamed its searchlight on the community and that the situation was being watched.

It is however not certain if the notice emanated from the ESN.

Attempts to reach the spokesperson of IPOB, Mr Emma Powerful, were not successful as at the time of writing this report. The Indigenous People of Biafra, IPOB, has replied the Senior Special Assistant to the President on Media and Publicity, Mallam Garba Shehu.

Shehu had said that the arrest and trial of Mazi Nnamdi Kanu, would lead to the end of the group.

“In the South-East, IPOB – which the Economist rightly describes as “delusional” – the arrest and present trial of the terrorist leader of the group is the beginning of its demise.

“The President’s administration is redoubling efforts to have IPOB rightfully designated as a terrorist group by our allies outside of Nigeria – an act which will collapse their ability to transact gains from crime and extortion in foreign currencies.

“It is important to remind the Economist and the global media that this group’s aggression and widespread presence on social media does not reflect their public support, for which they have none: all elected governors, all elected politicians and all elected state assemblies in the South-East – which IPOB claim to be part of their fantasy kingdom – reject them completely”, Shehu said.

Reacting to the above statement IPOB through its spokesperson, Emma Powerful faulted Shehu’s postulation, noting that Kanu’s rendition would rather strengthen the group.

“The attention of the global family of the Indigenous People of Biafra (IPOB) ably led by our great leader Mazi Nnamdi KANU has been drawn to the ranting and laughable statement from Garba Shehu the SSA Media to President Buhari, saying that the extraordinary rendition of IPOB leader will lead to the end of IPOB agitation.

“We are surprised at the level of cluelessness and ignorance displayed by Garba Shehu about the operations of IPOB. We therefore, want to assure him and his co-travellers that extraordinary rendition of our leader Mazi Nnamdi KANU will rather destroy Nigeria and not IPOB. By kidnapping and renditioning Mazi Nnamdi Kanu, Nigeria has committed international crime and must not go unpunished.

ALSO READ:  MAZI NNAMDI KANU'S BROADCAST ON THE DAY THE ZOO DISGRACED THEMSELVES

“The world doesn’t need any further proof that IPOB is a peaceful movement. The kidnap of its Leader by the Nigerian Government is a crime that must be punished. So, by this singular violation of international law, Nigeria is in already but instead of admitting the obvious its officials are busy playing to the gallery.

“But very soon, the masterminds of this heinous crime will be rounded up and handed over to the international criminal court, ICC for prosecution. IPOB is not a push-over movement, and we cannot be intimidated. Just very soon our oppressors will be taught by ICC in the language they understand.

“IPOB remains a non-violent organisation but has been the victim of the high-handedness of the Nigerian Authorities. They will pay for their atrocities very soon

“We want Garba Shehu, Mungono the National Intelligence Agency and the Attorney General of Nigeria, Abubakar Malami to stop displaying their ignorance of international law.

“They should stop the media trial of our Leader whose matter is already pending in a court of law, because the whole world is aware and knows that Fulani has destroyed Nigeria and the world will not join them to call IPOB terrorist organisation.

“Mungono leave IPOB alone and face what is facing you and your people. This is not 1970 when the world looked the other way while they committed mass atrocities in Biafra land. IPOB is getting stronger by Kanu’s rendition while Nigeria is headed for destruction. 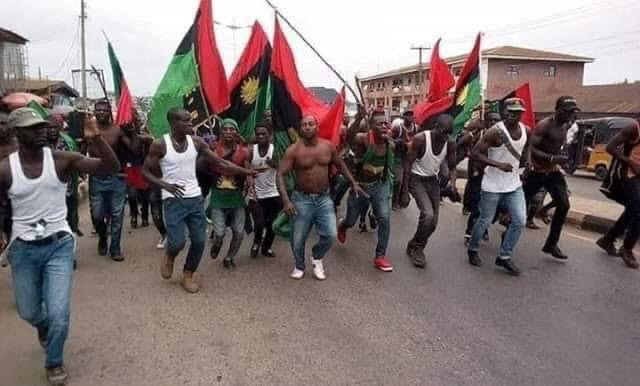 Ohanaeze Ndigbo, the Pan-Igbo socio-cultural organization, has warned against the harsh effects of the planned one week sit-at-home directive by the Indigenous People of Biafra (IPOB) in the southeast region.

In a statement by its Secretary General, Mazi Okechukwu Isiguzoro, and sent to DAILY POST on Tuesday, against the backdrops of the planned exercise by the pro-Biafra group, Ohanaeze, maintained that the planned one week sit-at-home declared by the group was gradually having severe and destructive impacts on the genuine quest of the people to enhance and harness the economic potentials of the southeast for her development.

DAILY POST gathered that the pro-Biafra group had insisted to shut down the entire Igboland as parts of demands, for unconditional release of its detained leader, Onyendu Nnamdi Kanu, who is currently facing treasonable felony charges before Justice Binta Murtala-Nyako-led Federal High Court in Abuja.

Continuing, the Engr Chidi Ibe-led Ohanaeze Ndigbo, revealed that proponents of sit-at-home are envoys, on a move to destroy the only remaining assets(commerce) of the Igbos, in the face of external detractors, regretting that southeast had recorded exits of local and foreign investors from the region in the last two months, which, according to the group, created high level of unemployment, loss of jobs and disruption of the academic calendar, as the Ndigbo must cease it henceforth.

The highest socio-cultural group, noted with dismay that, the fact that successive and current Nigeria system had treated south-easterners in bad morality and faith, we must not resort to path of self destruction, advising the people of the southeast not to affiliate with those he alleged, remotes Ndigbo from overseas.

According to the Igbo body, “proponents of sit-at-home are not observing the exercise at abroad where they residents. In Asia, Europe, and America, ndigbo are wiser now than before. No more sit-at- home. We are in support of out-of-court settlements that will make Nnamdi Kanu regain his freedom, not through absurd enslavement of the people with the one week planned sit-at-home exercise”.

Ohanaeze further rechoed the call for genuine dialogue between internally displaced Igbo politicians and the people, especially, to end the revolt against the elites.

It said, “We observed that Igbos’ loyalty to non state actors has been abused, as they have pounced on the confidence of Ndigbo, through the absurdity of sit-at-home, and which also is conceived to obliterate the established investments in region owned by southeast elites and politicians. These proponents of sit-at-home are not local investors, entrepreneurs and importers. The idea of sit-at-home is geared towards the destruction of targeted established investments of corrupt politicians and elites since they are without any visible investments.

“The past sit-at-home by IPOB had destroyed the academic activities, small businesses, and artisans who depend on daily trade and services to feed their households. IPOB leaders don’t have any visible investments in the southeast, they are only using Ndigbo as baits and pawns against the Igbo political class especially on Anambra elections. The consequences of their actions might be detrimental and pernicious to the point where federal government will eventually deploy the super tuscon fighter jets to the southeast, in pretense to quell the fallout from the one week sit-at-home. Ndigbo should henceforth break from the local siege of proponents of sit-at-home without investments in the southeast zone”, the apex body concluded. 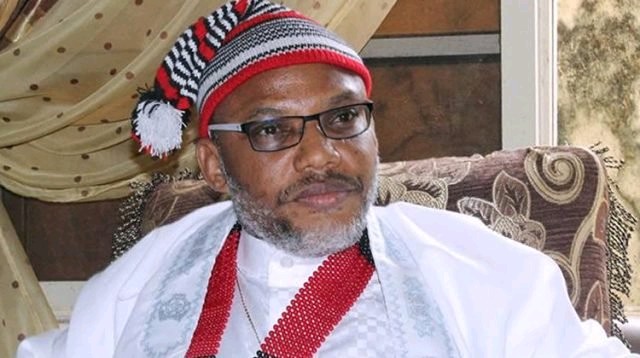 Leader of Indigenous People of Biafra, Nnamdi Kanu, is delighted by the ‘urgent appeals’ written by United Nations bodies to Nigeria and Kenya.

His lawyer, Aloy Ejimakor, made this known in a tweet after his meeting with the Biafran agitator on Tuesday.

The United Nations had issued ‘Urgent Appeals” to both the Nigerian and Kenyan Governments respectively, demanding immediate stoppage of any torture or violation of rights committed against the detained leader of IPOB.

UN also warned of serious consequences if the allegations of torture and violation of fundamental human rights against the IPOB leader were confirmed.

ALSO READ:  MAZI NNAMDI KANU'S BROADCAST ON THE DAY THE ZOO DISGRACED THEMSELVES

The UN intervention followed a petition to the UN by Kanu’s brother, Kanunta Kanu; and his counsel, Mr. Aloy Ejimakor.

UN’s “Urgent Appeals” to Nigeria and Kenya, according to a statement by Kanunta, have been transmitted to both countries since August 26, and acknowledgment received from Nigeria’s Permanent Mission to the United Nations in New York on September 17.

Ejimakor tweeted, “I just concluded a visitation with #Onyendu. He salutes all Umuchineke for remaining focused on the mission of the moment. He’s happy with the ‘Urgent Appeals’ issued by the UN against Nigeria and Kenya & salutes @MaziKanuntaKanu and Bindmans for their efforts in this regard.”

In the appeal, UN demanded an explanation of the initial steps taken by the Federal Government to safeguard the rights of Kanu in compliance with international instruments.

The mandate read, “As it is our responsibility under the mandates provided to us by the Human Rights Council to seek to clarify all cases brought to our attention, we would be grateful for your observations on the following matters: any additional information and any comment you may have on the above-mentioned allegations.

“Please provide detailed information on the current state of health of Mr Kanu and the measures undertaken, or foreseen, to prevent any irreparable damage to his life and personal integrity and to ensure that he has access to the medications and medical treatment required by his health conditions.

“Please provide detailed information on the circumstances in which Mr Kanu was arrested, forcibly disappeared before being handed over to Nigerian authorities and transferred from Nairobi to Abuja. Also provide any international arrest warrant that may have been issued against him, prior to his arrest.”