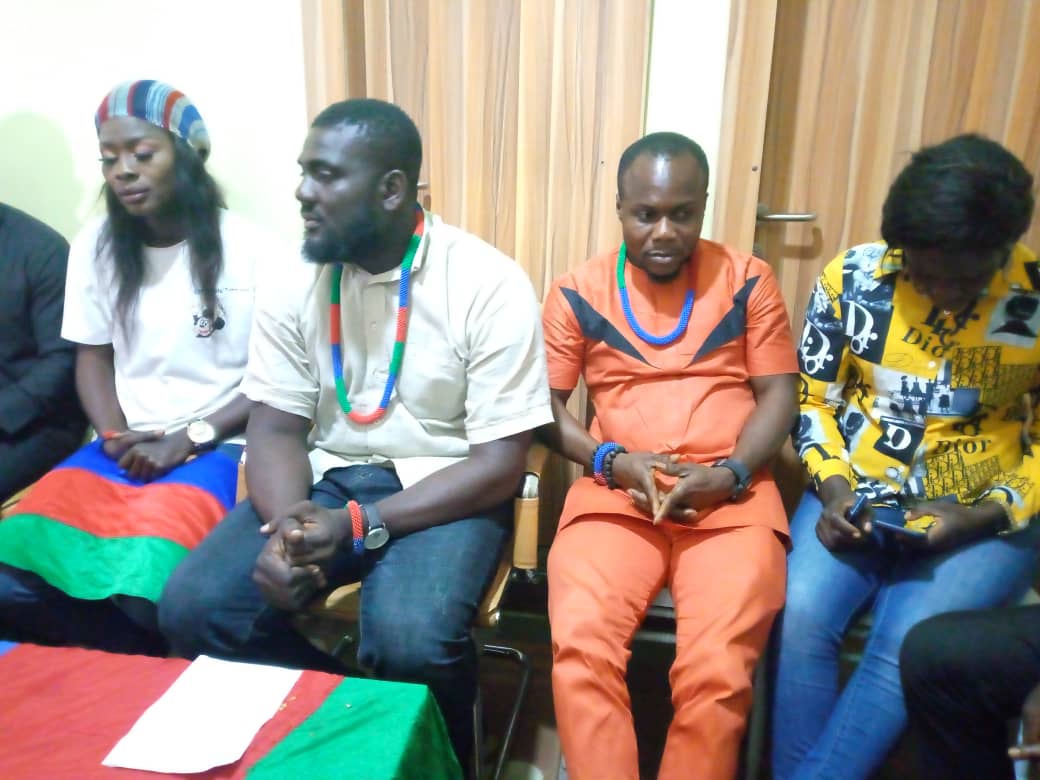 Consider Us For Commissionership Position, Edo Ijaw Appeal To Obaseki

The Ijaw ethnic nationality in Edo State has appealled to the state governor, Mr Godwin Obaseki, to consider them in his next appointment for commissioner and Special Advisers into the State Executive Council.

The appeal was made by Comrade Olu-Derimon Omaghomi, Secretary, Ijaw Youth Council, IYC, Western Zone, comprising Ondo, Edo and Delta states on behalf of the five clans in the state and the entire Ijaw nation during a press conference in Benin at the weekend.

Omaghomi, who was flanked by clan chairmen, secretaries and woman leaders from the five clans in the state, decried the continuous neglect and marginalization of Ijaw people in the state.

He insisted that, the Ijaw speaking people, being aborigin of the state deserve commissionership position in the State Executive Council of the Governor Godwin Obaseki-led government.

According to him, in spite of their huge contributions economically and politically to the development of the state, they have been neglected in terms of infrastructure and anything that has to do with government providing for the people.

He lamented that out of the eleven (11) commissioner-nominees and two Special Advisers forwarded by Mr. Governor to the state House of Assembly for screening and confirmation, not a single Ijaw name was included despite voting for Obaseki massively in the 2020 governoship election.

Further speaking on political marginalistion, he noted, “As we speak, Ijaw man is not in the state House of Assembly; Ijaw man is not in the House of Representives; Ijaw is not even consider for chairmanship position in Edo State. I want to state that we are part of the system; we are not strangers, we are aborigin. In the three local governments areas I mentioned earlier, at least if the Ijaw man is not the chairman, he should be the vice-chairman, that is what can be regarded as equity, justice.

He continues his lamentation in an emotion laden-voice: ‘We are not happy as Ijaw people. We are Ijaw people and we have five clans in Edo State namely, Egbema, Olodiama, Gbaraun, Furupagha and Okomu. And all these clans are economically viable. We have contributed economically to the growth of Edo State. And not just economically, but politically. Our votes from these five clans in the three local government areas of Ovia South-West, Ovia North-East and Ikpob-Okha were massive in the 2020 governorship election, but as I speak, there is political marginalistion of the Ijaw ethnic group in Edo State.

“Mr. Governor Sir, prior to your re-election in 2020, you made a wide consultations with our leaders like Tompolo, Douye Diri, governor of Bayelsa State, our father, Edwin Clark and many other Ijaw leaders to help talk us to support you, and they did and our people yielded by voting for you massively. Of course, as we always have in politics, some of people may have not voted for you but majorly, the Ijaw people votes counted for the candidacy of Godwin Obaseki of the PDP and he was declared winner.”

He continues, “During the election, we lost a prominent woman who happens to be a major victim in the election, and till today as I speak, not a word of sympathy has come from the Governor let alone visiting the family particularly the children she left behind. This is an Ijaw woman that was in support of the PDP and Obaseki till her death.”

“Even our water ways are not cleared for fishing. If the governor is not considering us for road construction, he should help us clear our waterways for fishing, this is our major livelihood.”

The IYC Western Zone Secretary therefore appealled to Obaseki to consider the Ijaw speaking people for commissionship position in his next appointment.

Insecurity In Anambra: FG should be blamed – Peter Obi

For 21 years, PDP, APC have been misleading Nigerians – Attairu Jega 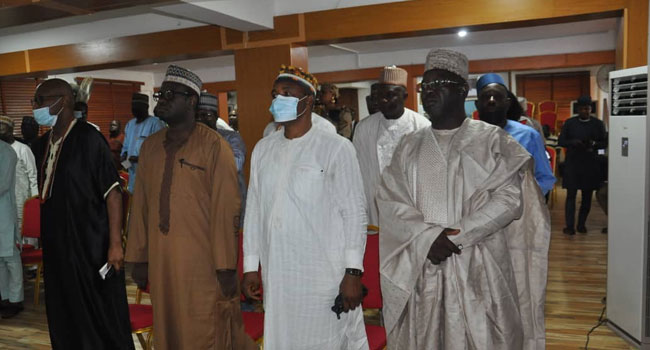 The All Progressives Congress (APC) has inaugurated the appeal committees to address the concerns raised by aggrieved members following its recently concluded state congresses.

The committees were inaugurated on Thursday at the APC national secretariat in Abuja, the nation’s capital.

He explained that this formed part of the internal mechanisms of the party to ensure dissatisfied members could approach the committees to get their grievances resolved.

Akpanudoedehe promised that the APC would ensure its channels of communication were kept open as dictated, in line with the constitution of the party.

According to him, it is important for members to stay united in order to win the forthcoming elections in Anambra, Ekiti, and the general elections in 2023. 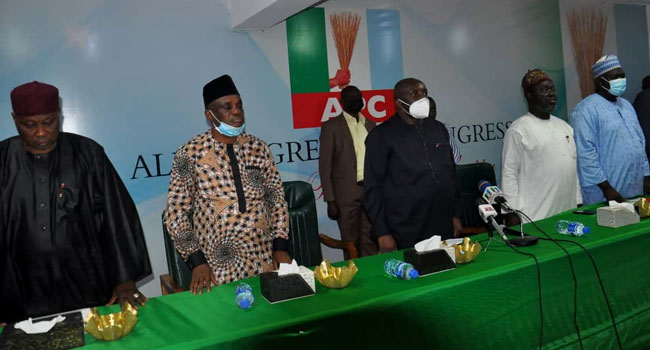 Read his full statement below…

REMARKS BY THE NATIONAL SECRETARY OF THE APC CARETAKER/EXTRAORDINARY CONVENTION PLANNING COMMITTEE (CECPC), SEN. JOHN JAMES AKPANUDOEDEHE PH.D DURING THE INAUGURATION OF THE PARTYS STATE CONGRESS APPEAL COMMITTEES ON THURSDAY, OCTOBER 21, 2021 AT THE APC NATIONAL SECRETARIAT IN ABUJA.

Once again, may I, on behalf of the National Chairman of the CECPC H.E (Hon) Mai Mala Buni, welcome you all to the National Secretariat of our great Party and to this very important event which is the inauguration of the States Congress Appeals Committee.

You all will agree with me that the process of recalibrating our party into a functional winning machine in 2023, is well on course.

With the huge membership strength we have recorded during the last registration and revalidation exercise, there is no doubt that Nigerians still trust us and that we will win all the upcoming elections convincingly, starting from the Governorship elections in Anambra, to Osun, Ekiti and to the 2023 general elections.

Nigerians by now have realized that the APC led-government of President Buhari means well for Nigerians and is doing everything possible to deliver infrastructure to Nigerians amidst difficult economic times, globally. We must stay united so we can defeat the agents of destruction who have vowed to set Nigeria backwards. Just this morning, an Abuja-Kaduna passenger train was attacked by criminals, depriving Nigerians the services it provides. This is so despicable, but together we shall overcome them.

Therefore, there is greater need to sustain the trust of our party men and women and indeed all Nigerians.

In a bid to provide development to our people, this party has afforded many of our party faithfuls, the platform to attain various positions, either elected or appointed, it will still do so for many others going forward. Hence, all true party men and women must see dissensions within the party as family disputes and should not seek to destroy the platform which helped them in times past.

As a party, we shall ensure that channels of communication are kept open, as in the instant case and as dictated by the constitution of our party. This Appeals Committee is part of the internal mechanisms so that those who may feel dissatisfied with the States Congresses can approach the Committee and ventilate their grievances through this avenue.

It is elementary law that he who alleges must prove, so instead of taking issues to the media space, let them put forward their case before this Appeals Committee.

I urge you all to ensure that fair hearing and justice be your guiding principles in the task entrusted to you.

You all were carefully selected based on your proven track record of integrity and capacity to deliver. The party trusts in your ability to bring to bear on this task, your incredible credentials. Over the past weeks, there have been speculations on who will become president in 2023, especially with the issues raised by politicians on zoning.

Speaking on Thursday during an interview on Channels Television, Makinde said the Peoples Democratic Party (PDP) has “eminently qualified” personalities that can lead the country successfully.

The governor said the only way of stopping the PDP in 2023 is by dividing the party, adding that the governors elected on the platform of the party understand the need for unity ahead of next general election.

“I make bold to say that the situation in this country today, the only way that you can stop PDP at the federal level is by dividing PDP internally,” the Oyo governor said.

“All the governors of the PDP are well aware of this fact and we made unity within ourselves our number one priority. Once the governors of PDP are able to move in one direction, align on most of the issues and the challenges we are faced with, I think there is hope for this country.

“The issue right now is that our party — PDP — has eminently qualified personalities that can lead this country successfully. Some have indicated interest like former Vice-President Atiku Abubakar, like governor Tambuwal, like governor Bala Mohammed.

“They have indicated interest. But the bottom line is when we get to that bridge, we will definitely cross it. What is important at this stage, which I will solicit the support of PDP members and the generality of Nigerians, is please support us to have a successful national convention

“There is no way you can become anything — president, vice-president, even governor — if we don’t have a party. What we want to do first is ensure that we get things right within our party.”

Asked if he thinks the PDP will take over power from the APC in 2023, he said: “Well, it is a question that I know Nigerians will answer and they will answer decisively.” Supreme Court in Abuja has declared Mr Valentine Ozigbo the authentic candidate of the People’s Democratic Party (PDP) for the November 6 governorship election in Anambra State.

The apex court, in a judgement delivered at the Supreme Court Complex in Abuja on Thursday, October 21, reportedly threw out all the challenges to Ozigbo’s candidacy and awarded damage of N5 million against Senator Ugochukwu Uba.

The panel of justices, led by His Lordship, Justice Inyang Okoro, according to the report, affirmed the decision of the Court of Appeal Awka Division delivered on September 3, which declared Ozigbo the authentic governorship candidate of the PDP.