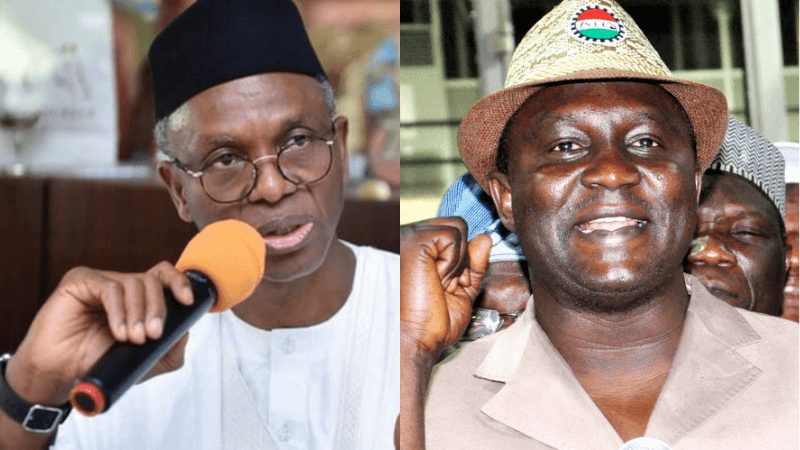 The governor in a radio interview in Kaduna on Thursday night said the NLC leadership was paid from Abuja to organise the last protest in Kaduna.

NLC had held the protest against a planned mass sack of workers by the state government which said it was spending too much on the state’s revenue on its civil servants.

The federal government stepped in after three days of the five-day warning strike and got the two parties to the negotiation table.

But Mr El-Rufai’s tone since the truce shows he is not mollified.

“We know what happened, the NLC were paid from Abuja to come to Kaduna and protest and we know who gave them money, we will soon expose them,” Mr El-Rufai said in the interview.

He said the NLC staged the protest without any concrete evidence that the state had retrenched public servants inappropriately.

“Some civil servant have fake certificates, some are using other people’s certificates. We are checking all that and when we finish we will do away with them. So what the NLC is saying about the state is wrong.”

The governor further repeated his threat to prosecute all those who participated in the NLC protest.

The protest resulted to the cutting off of Kaduna from the electricity national grid for three days before the intervention of the federal government.

The state government insisted on its plan to sack civil servants it consider excess load despite the intervention.

“We have asked our commissioners and permanent secretaries to cut down the number of their aides to just two. We have also reviewed some of the appointments and have since sacked 99 of them so far.”

Asked why he did not make the list public, Mr El-Rufai said it was deliberate to make it secret to protect those affected.

The governor also spoke on why the state government increased tuition fees in its tertiary institutions.

“We have to do that, yet what we say students should pay is still not enough. But we have to do that to sustain our institutions. Many parents spend thousands of naira to pay for their children’s primary and secondary education, but coming to the university of polytechnic, they pay less and they are complaining. We can’t run our institutions like that.

“We have provided scholarships for our students and even education loans, we have sponsored some of our bright students to overseas and they are doing well. Even the less privileged who cannot afford it at all we take it upon ourselves to support them throughout.

“All you have to do is to provide us with your father’s tax certificate. We will review it and we take it from there. We sponsor you fully.”

ALSO READ:  Senate Moves To Establish Commission Against Illegal Use Of Guns

ALSO READ:  Ganduje Says He Will Be Active In Politics Beyond 2023