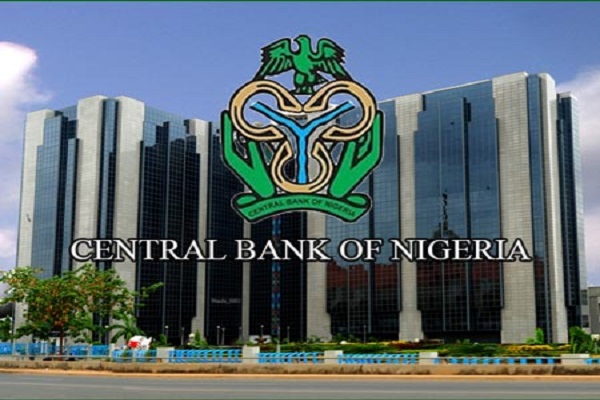 CBN Gives Why eNaira, other interventions are important

The initiative and other interventions by the apex bank will also facilitate the journey to economic diversification of the economy.

CBN spokesman, Osita Nwanisobi, who highlighted 37 interventions at a seminar in Lagos, explained that they were designed as responses to socio-economic situations and exigencies.

Reporters, who attended the ” Master Class” with the theme: Central Bank of Nigeria interventions as fulcrum for economic diversification,” lauded the interventions.

The event was organised by the Centre for Financial Journalism in Lagos.

Nwanisobi said the interventions reflect the vision of the CBN Governor, Mr. Godwin Emefiele, whom he said had pledged to run a people-centric central bank upon assumption of office.

Nwanisobi said the interventions were, therefore, a conscious effort by the CBN to ensure that Nigerians especially the ordinary folks benefit from the economy.

CBN Gives Why eNaira, other interventions are important

“These interventions do not just happen, they are well-thought out responses by the CBN to exigencies. You would recall that when he assumed office in 2014, Mr. Emefiele promised to run a people-centric CBN and a financial system that would meet the needs of the average Nigerian,” he said.

In clear terms, he said the interventions were responses to market failures, stressing that no responsible central bank would fold it hands and watch the nation’s economy collapse.

“Interventions are necessary. Without interventions where would the Nigerian economy be by now?” he asked rhetorically.

“Who would have thought that a time would come in Nigeria and the rest of the world that economies would experience total shutdown as we experienced in the case of Covid-19? Just imagine what would have happened if CBN did not respond with well-planned intervention in the containment of Covid-19 and the attendant financial crisis,” the CBN spokesman said.

Mr. Olabimtan Adebowale of the Development Finance Department of CBN in his presentation outlined the benefits of the various interventions which he described as “development finance interventions”, meaning they are well-planned interventions targeted at meeting specific needs all aimed at growing the economy and improving the living standards of the people”.

He said the interventions were meant to increase lending to high-impact and employment-elastic sectors of the economy, diversify economic base, create jobs and improve macroeconomic stability. Other purposes of the interventions include to encourage exports and conserve foreign exchange reserves, expand output of agriculture, manufacturing and services sectors, provide access to affordable credit, and boost the capacity of MSMEs in priority sectors of the economy.

According to Adebowale, one of the interventions aimed at boosting local production and creating employment is the new financial instrument titled “The 100 for 100 PPP – Policy on Production and Productivity”, which will be anchored by the Development Finance Department under the direct supervision of the CBN Governor. Under the policy, the CBN will advertise, screen, scrutinize and financially support 100 targeted private sector companies in 100 days.

On the eNaira, which was launched on October 25 by President Muhammadu Buhari to complement the physical naira and help deepen the digital economy space, Mr. Yusuf Abduljelil in his presentation, said Nigeria was the first African nation to introduce a central bank digital currency and one of the early birds in the world.

During the master class, editors were able to onboard seamlessly to the eNaira platform. On the issue of hacking and vulnerability to compromise by cybercrooks, the CBN official explained that the eNaira platform has enough layers of encryption and integrity that insulate it from hackers.

Nigeria is currently among the top nations of the world with growing and robust e-payment systems. The eNaira will further boost the nation’s rating in e-transactions.

Police On Trail Of Us-based Nigerian Over N22.5 Million Fraud In a letter dated 1st December, 2021, addressed to Governor Willie Obiano of Anambra state, the aviation authority said that it has received security clearance from relevant security agencies for the opening. It said that the negative security clearance was the reason the authority had declined approval for the opening of the airport on the 30th of October 2021, when the state government had scheduled the commissioning.

In the interim, Category B aircrafts are permitted to land and take off from the airport from sunrise to sunset.

Speaking on the development, Anambra state Commissioner for Works, Engineer Marcel Ifejiofor praised the efforts of Governor Obiano who never relented, even while on vacation to ensure that the Anambra airport becomes operational ahead of the Christmas 2021 mass return of Ndi Anambra living in the diaspora, and other visitors.

With this NCAA clearance, airlines already approved by the relevant authorities to operate at the Anambra airport such as Airpeace, Ibom Air, United Nigeria and others are expected to start scheduling flights into and out of the airport immediately. 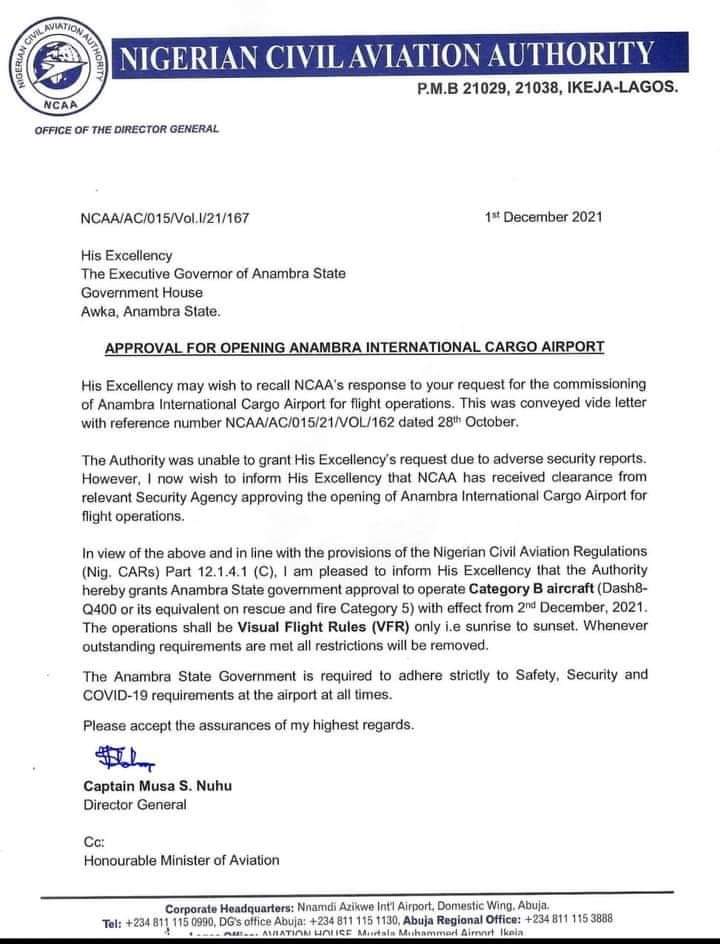