The Peoples Democratic Party (PDP) and All Progressives Congress (APC), the two leading opposition political parties in Anambra State, have already given up on the November 6 gubernatorial election in the state, according to Governor Willie Obiano, who argues that they have practically conceded victory to the ruling All progressives Grand Alliance (APGA).

In response to a series of questions sent to him by the Anambra State Media Team headed by Information and Public Enlightenment Commissioner C. Don Adinuba on the state’s preparations for the election, Governor Obiano said in an email this morning that the two parties practically gave up participation in the vote the “moment the APGA nominated on June 23 Chukwuma Charles Soludo, the internationally renowned economics professor, reformer and former Central Bank governor as its governorship candidate”.

“The PDP and APC are in such low spirits and disarray now that they cannot choose running mates two weeks after they held their controversial congresses where the PDP, which held two parallel congresses, chose two candidates from the same local government area to fly its flag and the APC announced the result of an election in which not one single person, not even Senator Chris Ngige, the party’s leader in the state who is also the Minister of Labour and Productivity, saw the electoral materials, let alone allowed to vote”.

Chief Obiano contrasted the state of preparedness of the two parties with APGA’s.

“Professor Soludo announced his running mate, Dr Onyeka Ibezim, a medical doctor and accomplished technocrat, a week after his own nomination, to the applause of the whole state”, he proudly stated.

He revealed that there was an intense lobbying for Soludo’s running mate.

There was a good number of solid candidates, he said, “but Soludo and the APGA leadership worked hard and closely to choose the very best”.

In contrast, he declared, “the first person the PDP was considering to run with one of the two claimants to its flag, Professor Chinyere Stella Okunna, who was the Commissioner for Information and Culture in the administration preceding mine, not only rejected the consideration, but personally wrote to the media, including online publications, to urge the party to leave her alone.

“This is one of the few cases in Nigerian political history where persons being considered for high office are rejecting the offer with alacrity. The truth is that everyone knows that the game is over for the PDP, so there is no point wasting their time and resources.

“As though the situation was not bad enough for the PDP, another group in the party went public to attack my predecessor, vowing to resist with every fibre in its muscle the ongoing spirited attempt to impose a deputy governorship candidate on its faction”.

Obiano continued: “Much as the situation is very bad for the PDP, it is far worse in the APC.

“The party’s vehement refusal to conduct any kind of congress or primary election only to have the effrontery to announce at Agulu Lake Golden Tulip Hotel the next day the result based on the fatuous claim that several thousands of its members voted will hunt it terribly, undermine whatever integrity it ever possessed and profoundly dispirit its leadership as well as its rank and file.

“It is a matter of speculation whether any self-respecting person will allow himself or herself to be its running mate in an election which Anambra people have already made up their mind to stand with Soludo all the way”.

He restated the statement he made last week that top APC and PDP leaders have spoken to him in private and pledged to not only vote for Soludo but campaign openly for the former Central Bank of Nigeria governor.

“This Soludo candidacy is unstoppable, which explains why both the PDP and the APC played every trick in the book and pulled all manner of propaganda stunts to stop Soludo from clinching the APGA ticket but he ended up with 93.4% of the votes cast at the Professor Dora Akunyili Women Development Centre.

“Our congress was televised live and everyone saw the primary election was free, fair and peaceful, but neither the PDP nor the APC bothered to broadcast its events on television.

“The two parties have, for all we care, given up as far as the November 6 gubernatorial election is concerned”. 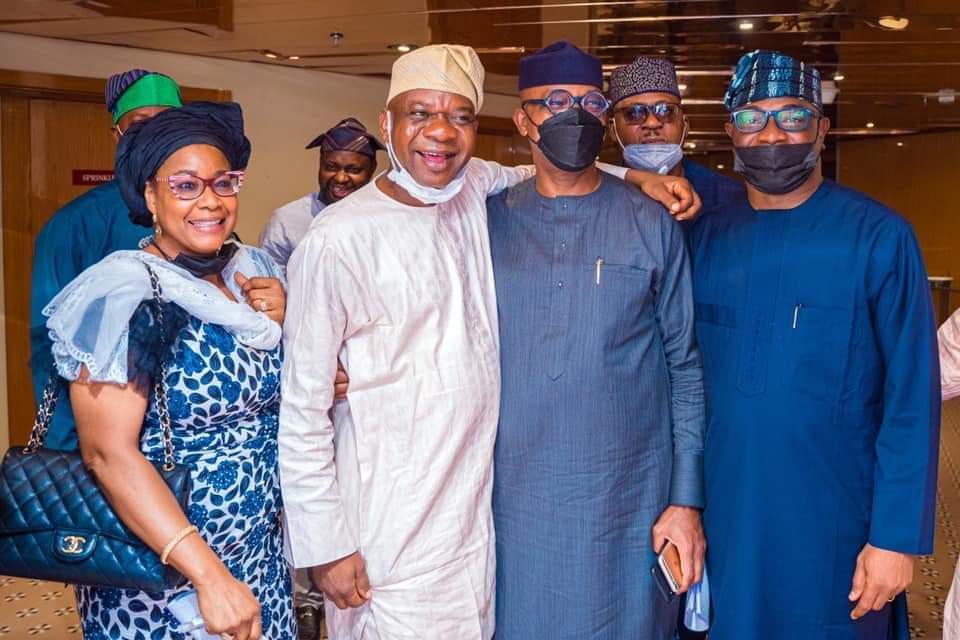 House of Representatives member, Hon. Rep. Ibrahim Ayokunle Isiaka, representing the people of Ifo/Ewekoro federal constituency has once again fulfilled a significant aspect of his legislative roles by initiating a Bill for an Act to Provide Establishment of National Technology Park Development Agency; for Related Matters which has scaled through the second reading at the floor of the house of representative, Abuja.

The Bill is targeted towards youthful development as the passage of the bill will open up self-reliant opportunities for the teaming youths, as the whole idea is to establish the industrial park in the three geopolitical zones, it would be narrow down to Ogun State if possible to be propagated to the bearest minimum where the youths can brainstorm and showcase their ideas and creativity Amebo Newspaper NG learnt.

The bill was passed year’s ago and it entered second reading before the holiday of the house of representative members, from here now it would be passed to the committee and for concurrence and later passed to President Mohammadu Buhari for ascent and approval.

In the same vein, Honorable Ibrahim Isiaka he used his position as the chairman house committee on ecological funds, federal house of representative, Nigeria to bring succor to the constituent through erosion control and water project for sustainability of the dwellers of Ifo-Ewekoro federal constituency.

He has been able to get the youths to work through agricultural value chain projects to enable the constituents to have sense of belonging quality representation. Joe Igbokwe, a chieftain of the All Progressives Congress, APC, has reacted to the remark by the Northern Elders Forum, NEF, on President Muhammadu Buhari’s successor.

Igbokwe warned that heaven would fall if another Northerner is elected after Buhari.

Hakeem Baba-Ahmed, NEF spokesperson had said the North was not ready to relinquish power in 2023.

Baba-Ahmed had said anyone against a Northern president should leave Nigeria if one emerges in 2023.

The NEF spokesman had disclosed this at the Maitama Sule Leadership Lecture Series in Zaria, Kaduna.

ALSO READ:  Femi Fani-Kayode Writes Tinubu: A Bat From Hell And The Asiwaju Of Blood

However, Igbokwe, on his Facebook page wrote: “Heaven won’t fall if another Northerner is elected president – Hakeem Baba-Ahmad.

“Me- Hear me well, heaven will falloooo.”

Most Nigerians have frowned against the North producing the country’s next president.

Against this backdrop, the Southeast has been clamouring to produce Nigeria’s next president.

Recently, Southern governors had insisted that their region should produce Nigeria’s next president. 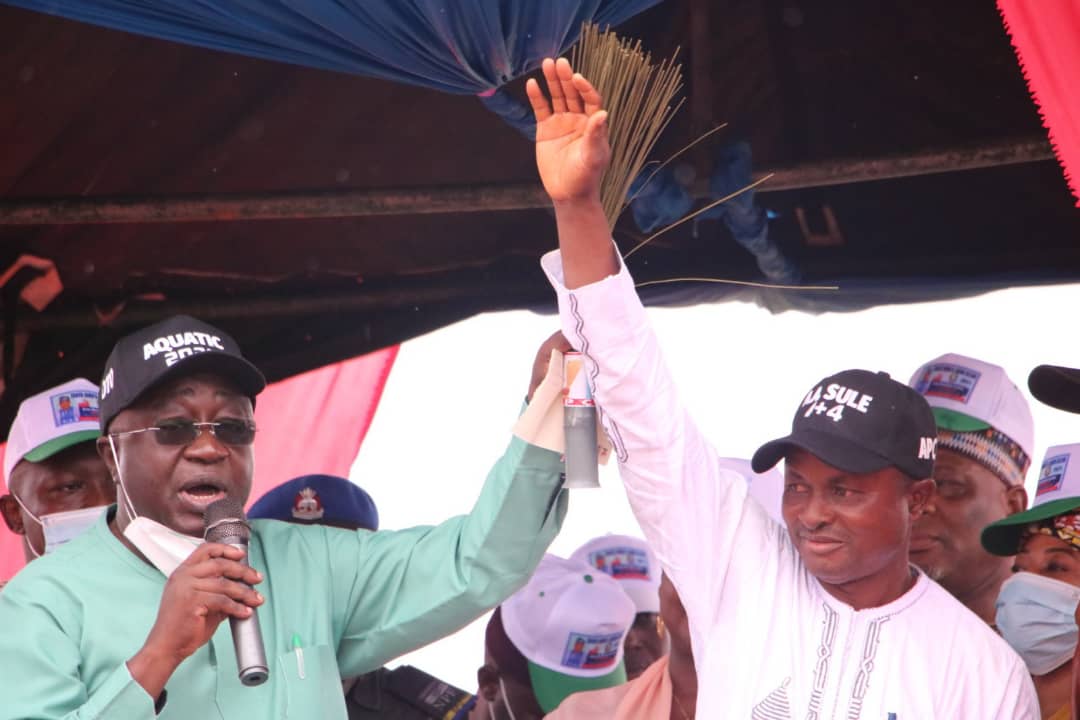 “…as Gov. Sule tasks supporters on House to House campaigns…”

The Speaker, Nasarawa State House of Assembly, Rt.Hon Ibrahim Balarabe Abdullahi has said that the All Progressives Congress ( APC) will win the Oct. 6 local government election in the state with landslide victory.

Balarabe Abdullahi stated this during flag off campaign of Toto Local Government Area Chairmanship and Councillorship candidates today in Toto.

The speaker said that Toto LGA is the strong hold of APC in the state and will deliver the chairmanship and councillorship candidates of the party come Oct.6.

“Today we have no any other party than APC, Toto Local Government Area will continue to remain the home of APC in Nasarawa State.

” Also those big wigs in PDP yesterday are now in APC and by God’s grace, APC will come out victorious at Oct. 6 local government election.

ALSO READ:  Femi Fani-Kayode Writes Tinubu: A Bat From Hell And The Asiwaju Of Blood

” His Excellency, I want to assure you that , we in Toto Local Government will not fail you and we will deliver APC come Oct.6 and beyond ,” he said.

Balarabe-Abdullahi called on the people of the area to come out enmass and vote all APC candidates during the election.

He has assured of his people’s resolved to support Gov. Abdullahi Sule beyond 2023.

The speaker has appreciated Gov. Sule for his security efforts in ensuring peace in the area and called for its sustenance.

Besides, he also appreciated the stakeholders and members of the party in the area for their peaceful conduct during the ward and local government congresses in the state.

On his part, Gov. Abdullahi Sule has urged the supporters of the party in the area to embark on House to House campaign for the victory of the party come Oct.6.

” I have heard you all and I have seen, in Toto Local Government there is no other party than APC .

” I urge you to embark on House to House campaign for the victory of the party come Oct.6, ” he said .

He has commended the speaker and other members of the state legislature for giving his administration the much needed support to succeed.

The Governor has assured of his administration’s continued commitment to key into positive policies and programmes that would have direct bearing on the lives of the people of the state.

Also speaking, Mr John Mamman, Nasarawa State Chairman, Caretaker Committee of APC has urged the people of the area to vote All candidates of the party during the forthcoming local government election in the state.

” Let’s vote Abdullahi Aliyu Tashas, our Chairmaship candidate, his Deputy an all the 12 councillorship candidates come Oct.6 for the progress of our party and the state at large,” he said .

Earlier, Hon Usman Labaran Shafa, Alhaji Ahmed Shauibu, Member representing Toto/ Gadabuke constituency at the state legislature and the party chairman in the area respectively have assured that the party will win the forthcoming local government election in the area.

They have commended the leadership qualities of the speaker and called on the people of the area to support Gov. Abdullahi Sule to succeed beyond 2023.